It’s a a sanitized and corporate kind of selection (lots of world-music acts, for instance) but the organization is sincere in providing a stage for jazz, including venerated masters who’d otherwise never come this far west.

They’ve also been good about supporting local acts, young but partly established musicians, and the occasional avant-garde trip. So, I get the catalog. I always thumb through it. And I always find something I like. 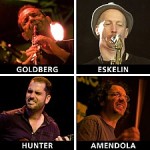 * Go Home is playing on March 18, 2011.  This is really exciting, considering it’s a band I didn’t expect would play many live dates — and yet I’ve managed to see them twice and might get a third chance. They’re the combination of Charlie Hunter‘s bluesy, funky guitar; Ben Goldberg‘s sinewy clarinet melodies; and Scott Amendola‘s hard-snap drumming.

There’s one personnel change: Trumpeter Ron Miles, from Colorado won’t be along. But as a substitute, they’ve brought in — and this is mind-blowing, really it is — Ellery Eskelin on saxophone. Eskelin is a key free-jazz figure in New York, capable of a wide range of styles. He can really cut a groove, too; a longtime favorite of mine is the 9/8 funk of “Rhyme or Reason,” with his longstanding trio with Andrea Parkins (keys/sampler) and Jim Black (drums).

Anyway. This should be really good.

* ROVA Saxophone Quartet has a concert with DJ Olive and DJ P-Love on Saturday, June 4, at the Swedish American Music Hall (upstairs from Cafe Du Nord). There’s an accompanying gimmick: At some point soon, it’s the 33-1/3rd anniversary of ROVA’s first performance, so they’re putting out a vinyl album. It’s a 45.  (No, it’s not, but that would be funny.)

That album will apparently be a recording of their 2009 concert with John Zorn.  For the June show, the turntablists continue the “33-1/3” theme. I’ve heard DJ Olive before, on albums with the likes of William Hooker and Uri Caine, and he adds more of a noise element than an enforced groove (although the latter would be an interesting constraint).

I don’t see ROVA as often as I should, and that’s a shame. Many of their shows are one-off happenings, because of the number of directions they’re working on and the relative dearth of gigs. Every show is compelling. It might sound like they’re going for a pop angle, but it’s safe to bet this show ends up being as challenging and rewarding as any.