Kneebody is playing in Boulder, Colo., on Thursday, Dec. 9, at Old Main on the CSU Campus. It’s a double-bill with Endangered Blood. (See “Endangered Blood: The Openers.”)

Also playing Friday, Dec. 10, in Denver at The Dazzle Showroom. 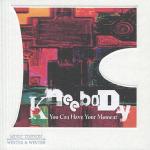 Continuing on the theme of people opening for Endangered Blood …

They’re great at mixing new elements with respect for the tradition, as the latest album shows. Check out “The Blind,” where Kaveh Rastagar’s fuzzed-out electric bass sounds like an indie rock lead from an electronica influenced band … but then the horns swoop in for a coolly soaring theme.

Then you’ve got the little experimental touches. “You Have One Unheard Message” flows almost like a rock instrumental, with a repetitive little blare, some criss-crossed time signatures a la King Crimson, the metallic clanking of what sounds like junk percussion (it’s probably just objects stacked onto the cymbals), and of course, luscious electric piano by Adam Benjamin. The song is a simple platform for creating a lot of activity; it’s a great listen with headphones.

There’s something about the sound of the drums on this album that really grabs me. Nate Wood creates a lot of musical motion — the continual patter driving “Nerd Mountain” sounds like a nice compact workout — but it’s also the sound. The skins sound particularly supple, the metal particularly crisp. It’s a terrific side dish for that electric piano.

“The Entrepreneur” is a real change of pace, a slower tune with a theme colored in daring slow horns and rich electric piano. Those elements make for a dramatic ending — after a few minutes of an intriguing spare space with occasional drums slapping against a keyboard curtain.

Other fun tracks: the bold expanse of “Held,” the daring slow horns and rich electric piano on “The Entrepreneur,” and the quirky modern-lounge pulse of “No Thank You, Mr. West.” The pulsing rhythm on that last one creates the illusion of a song flitting by in fast-motion.