So when an opportunity arose to visit Indianapolis, I eagerly bit. It was a conference I would have attended anywhere in the Lower 48, but the chance to visit a city I’d never seen before was an extra perk.

On my final day, I took a car well north of downtown, into the Broad Ripple neighborhood, to visit Luna Music and Indy CD & Vinyl. Luna sounds familiar; I associate them with Guided by Voices, and I vaguely recall a GbV release or two that I pre-ordered through them. Indy was new to me. Neither disappointed. Both were full of CDs and vinyl (as opposed to the used DVD sections overrunning the Bay Area’s otherwise excellent stores) and had friendly, knowledgeable staff. What a great way to spend a morning.

Biggest surprise of the trip: Indy Records has a small jazz/classical section, but next to it was a packed row full of Tzadik CDs. Lots and lots of Zorn (in fact, the section placard had Zorn’s name), but other artists in the catalog were there, too. This was recent stuff, not a patch of circa-2005 leftovers ordered by “that one guy who quit like a year later.” I knew I had to buy something.

I might never be in Indianapolis again, but I’ll gladly linger in both shops again if I return. Here’s the total haul: 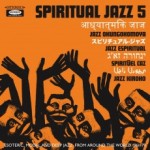 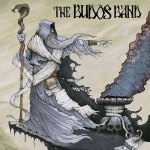 Final note: Every staffer at both stores was significantly younger than me, which was good to see. Record shopping has a tactile experience and a community aspect that can’t be replicated online. I understand why downloads dominate the industry, but it’s nice to see that record-store vibe living on.

Tonight and tomorrow (Oct. 25 and 26), Rent Romus will be presenting a new, jazz-sounding project with some deep personal ties.

“The Otherworld Cycle” is a suite honoring his Finnish roots. It’s based in part on the Kalevala, an epic of Finnish antiquity that tells the creation legend and other grand myths. I’ve never heard of it before, but it’s massive and, well, truly epic.

That’s one influence among many. You can read the full backstory on the project’s Indiegogo page, where Romus describes the cycle as:

a culmination of over 14 years of research into intersection between modern composition, improvisation, and Finno-Ugrian traditions in music. The Other World thematic abstractly reference the Uralic “Body of Memory” embedded in Romus’ musical psyche refracted through the multi-faceted lens of improvisation and postmodern jazz.

In addition to basses, saxophones, and drums, these performances will include some guest players and some traditional instruments: overtone flutes and a kantele (kind of a Finnish zither).

Here’s an excerpt from the cycle, performed by a small ensemble:

When I first started exploring creative music, an unexpected find was the European classical/ folk/jazz mix that I think is often called Eurojazz. That’s how I came to know it, anyway — that blending of jazz composition and improvisation with the towering structures and oddball harmonies of modern classical music, all played with a Parisian sidewalk-cafe vibe. Sometimes there would even be an accordion in the band, just for good measure.

Pago Libre comes to mind as an example. A couple of their CDs were on the doorstep at KZSU shortly after I arrived, as I recall. Pachora, a Balkan-jazz quartet including Jim Black and Chris Speed, was another early find and an obvious link in the Downtown NYC chain I’d traced after discovering Tim Berne’s Bloodcount.

Stacked in there somewhere is Eric Vloeimans, a Dutch trumpeter with a light touch and a wistful nostalgia in his playing. It’s likely I crossed his path because he was playing at Yoshi’s; I remember being charmed by his 2004 album Boom-Petit but lost the thread after that.

Vloeimans kept churning out music, though, and his latest band is a trio — with cello and, yes, accordion — playing cinematic sketches in Oliver’s Cinema. The name happens to be an anagram for Vloeimans’ name, but the “cinema” part fits the gently emotive music. Many of the tracks seem to come from still, thoughtful moments rather than high drama, and they’re very visual. “L’Amour des Moules” is a chatty stroll down a verdant park path; “Fellini’s Waltz” is a rich ballet of fantastical elegance.

It’s not far from what I remember of Vloeimans’ earlier work: lyrical, charming songs with a pretty touch, showcasing his crystal trumpet tone in a restrained setting. As with European cinema itself, there’s a lingering mix of happiness and sadness here. “Papillon” is a bittersweet slow song that’s so achingly French, and you can picture it representing fond memories or lost dreams, or both.

I’m not cinephile enough to recognize the classic soundtrack pieces on this album — “Papillon,” “Cinema Paradiso,” and “Rosemary’s Baby” among them. But the album still speaks to me with its depth of atmosphere; it’s subtle and hovering, rather than soaring and loud, and the understated nature sets the tone for what would be an equally understated — and therefore very nice — movie.

The sound of a conventional jazz guitar adds a touch of comfort to bassist Lisa Mezzacappa’s trio outing recorded last year. But just a touch. As you’d expect from the musician who’s given us the wildness of the Bait & Switch quartet and the electronics-laced atmosphere of the Nightshade group, the Lisa Mezzacappa Trio isn’t much for convention.

“Ghost Dance,” for instance, is written by Mike Pride, the drummer who crafted the raucous Drummer’s Corpse album. The song is even-handed in its fast tempo, but it splashes with noise — Pride goes heavy on the cymbals, and Chris Welcome’s guitar spews forth madly before setting into a solo.

Still, this trio isn’t as splatterpunk as Bait & Switch gets. Welcome does stay with a traditional jazz-guitar sound, even when doing nontraditional things with it, as in the scribbly line on “1989,” spinning back and forth like a top quickly wound and unwound.

Overall, this is a solid modern take on the jazz guitar trio, edgy without tipping into extremes of loud or quiet. Welcome’s contributions bring out the richness of the guitar, as you’d expect; “Jazz Brunch,” in particular, is slow and breezy and downright nice. And Pride’s “Negakfok” is a swingy, easygoing number that’s closer to what you’d expect from a jazz guitar band.

Among the more “out-there” moments is “The Deep Disciplines,” by Mezzacappa, introduces wide-open improvisation that comes to a full boil. Pride’s “Pottie Mouth,” by contrast, is careful and quiet, an expansive use of space, but again heavily focused on improvisation.

I have not listened to Mostly Other People Do the Killing’s Blue (Hot Cup Records, 2014), other than the samples on Squidco. But one of those samples is the opening passage to “So What.” I don’t have Kind of Blue memorized, but I do know those opening bars, and it sounds like they really did reproduce the track — every note.

That’s the concept behind Blue, which you might call more a performance-art piece than a normal album. It’s a re-creation of Kind of Blue, as close to the original as they could get, with lone saxophonist Jon Irabagon overdubbing the Coltrane and Cannonball Adderly parts.

The re-creation does seem to include the solos — again, judging by the one solo passage I know by heart: the first notes of the “So What” trumpet part. What’s more impressive is that they re-created the drumming, something I hadn’t considered before listening. In some ways, Kevin Shea had the hardest job of all.

It’s easy to pass off Blue as a joke, but the more I think about the idea, the more I feel myself getting obsessed with it. It seems like an irresistible personal challenge. To pull this off is worth some bragging rights. And what better way to not only pay homage to a record that, most likely, tops the list of early influences for all these guys, while at the same time getting deeper into the music, finding out what made it tick and sparkle.

I can see how this could build into an obsession over the years, until that day finally comes: “OK, let’s do this. Seriously, let’s get to work.” And Downtown Music Gallery notes that this is Peter Evans’ last album with the band, so it’s nice to bow out with a keen bit of precision jazz acrobatics.

I’m not sure I’m going to buy Blue. But I’m glad they did it.