I suppose it’s true that all things must pass, but it’s still sad whenever a music venue gets uprooted for economic reasons. The latest example being Meridian Gallery, which left its Union Square home in San Francisco last week.

The gallery’s landlord gave an advance warning of sorts, demanding $100,000 to cover upcoming rent. In pure business terms, Meridian got a fair shake — the gallery could have stayed if it could raise the kind of money that San Francisco’s hyperbolic spiral of rents commands. Of course, it couldn’t.

As unfortunate as this is for the visual artists and the musicians whom Meridian supported, the real tragedy might be the loss of a space for its youth arts program, which served the city’s at-risk high schoolers. Meridian, which spent seven years on Powell Street, has moved before and will now move again, but of course, relocation isn’t free. It’s another example of how it costs money to not have money.

Many thanks to proprietors Anne Brodzky and Anthony Williams for providing a home for creative music. Some results of those efforts can be heard on the compilation album Earth Music, released in 2011 on the Innova label.

Meridian’s home page still shows a “Donate” button, and I’m sure they wouldn’t mind the help.

It’s tempting to say Leslie Ross and Katherine Young have cornered the market on bassoon multiphonics. They haven’t, of course, but how many people do you think are out there making a name for themselves in that field?

Ross is a scholar of bassoon multiphonics. She’s also a bassoon builder by trade, working out of a studio in New York, but a highlight of her web site is a painstakingly thorough multiphonics catalog, with charts, musical notation and sound samples.

The Meridian concert will be a chance to get inside the bassoon. According to the description, Ross’ bassoon will be outfitted with microphones on every key, dissecting the sound and possibly throwing the components to different speakers around the room. I’m very curious what it’s going to be like. If I can clear time for the show, maybe I’ll give Young’s Further Secret Origins another study as a point of comparison; it’s not the same thing but does feature long drones of multiphonics. 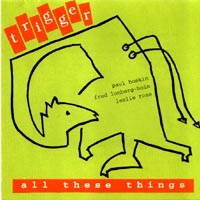 I decided to hunt down some of Ross’ recordings and came up with the late-1990s trio Trigger, with Fred Lonberg-Holm on cello and Paul Hoskin on bass clarinet. It’s one of the earliest releases on the Pogus label, Al Margolis’ sanctuary for experimental music. The album All These Things is full of spirited improv (and some spirited composing, too), in mostly short tracks that are often jumpy, with all three players bouncing upbeat, abstract sounds off each other. It’s novel to hear the bassoon’s voice in here, alongside the wide range of bass clarinet sounds — lots of low end is possible with this mix.

There are multiphonics here and there, although I can’t always tell which reed is producing them. It’s not a primary focus of the music, but it does produce some nice moments where one reed is droning away at a multiphonic while the other two players keep chugging forward at a fast clip. It’s as if they’re taking turns swinging one another’s weight forward in order to keep the assembly moving in one direction.

“Bang 448-2345” is a good 9-minute piece that has it all: uptempo classical composing (shades of Anthony Braxton’s Ghost Trance Music, just for a moment); a quieter phase where Lonberg-Holm explores bowed cello sounds and Ross chugs along with rapid, popping bassoon notes; and frenzied group improvising.

Moment of kismet: Hoskin, who’s from Seattle, has a Bay Area show coming up as well. He’ll be at Studio 1510, playing solo and in duets with Scott Looney, on Friday, Feb. 3. 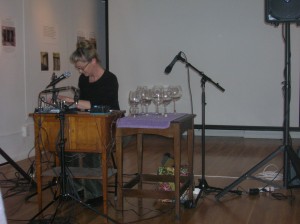 Dina Emerson‘s latest project is a song cycle based on the lives of bees, and when coupled with some video of bees, it makes for a drifting, other-worldly experience.

She performed it Wednesday at Meridian Gallery, to a healthy sized crowd. Emerson was in touch with a few of the local arts scenes while she lived here.  She’s now in Vegas, singing for Cirque du Soleil — a tidbit that pretty much every writeup has to include, because it’s cool.

I know her best for her avant-garde work in different contexts. I’ve written about her improv work with Jonathan Segel as Chaos Butterfly. And she’s been the vocalist on countless CDs we received at KZSU — especially one favorite of ours, “The Most Unwanted Song,” created scientifically (and tongue-in-cheek) to appeal to as few people as possible. Naturally, it’s 1,000 times better than “The Most Wanted Song.” Emerson does opera rap about country lifestyles (combining the three most hated types of music), and kids sing about holidays. The best part is when they start running out of the usual “song” holidays and start doing Arbor Day and Ramadan. 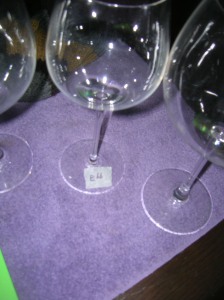 Emerson’s setup consisted of her voice, tuned wine glasses, and an iPhone to trigger samples. Using an echo delay on the mic, she clinked the wine glasses, hit them softly with a mallet, or rubbed the rims, creating ghostly sound effects.

Her singing was mostly in long tones, with a stillness to the music, as if the songs were meant to be images themselves, built from pitch and timbre. The bee video behind her unfolded slowly, starting off with images of kids running through fields under an achingly blue sky, but spending most of its time on the bees themselves in the hive, buzzing around their cells, tending to larvae, doing the things bees do.

The songs carried a reverence for the bees’ endless toil. One song was about the new queen arriving, the old queen stepping down. Another was about the dance bees do to direct their cohorts to a source of pollen. Emerson also lifted some text from an old educational movie about bees that describes the drone, which “doesn’t do anything.” That made for a nice refrain on one song.

I don’t think Emerson actually used the sound of bees, but she did vocalize some “Zzzz”s for one song.

Emerson’s next Bay Area appearance appears to be July 21, when she’ll be the guest vocalist with Tri-Cornered Tent Show as part of the Outsound New Music Summit.