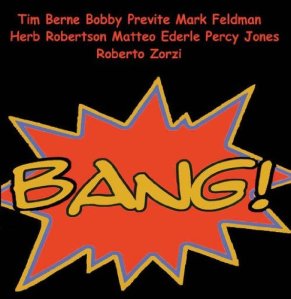 (UPDATE: Roberto Zorzi is going to be in San Jose on Oct. 12 and Santa Cruz on Oct. 15, as part of the International Live Looping festival. Andrea Centazzo will be in town as well. See Zorzi’s comment, below.)

It happens early in “Dartman,” Bang!‘s opening track. Bobby Previte‘s brisk drumming kicks in, and we’re transported back to 1990, back to the days when the Knitting Factory meant something, with carefree horn/violin unison lines shaping that downtown style of jazz writing. That airy violin sound, adding space to the melody — that’s Mark Feldman! There — there’s the tight curl of Herb Robertson‘s trumpet! That fast, crunchy electric bass that just has to belong to Percy Jones!

It’s like being the jazz equivalent of a Star Trek convention newbie. So much to point at! And that’s without even mentioning Tim Berne!

They’ve all convened at the behest of Roberto Zorzi, a guitarist who today is less well known and less well recorded than his sidemen. This is his septet, apparently called The Bang, which played at the Rocella Jonica Jazz Festival (Italy, I’m guessing?) in 1990 and released an album the following year. It’s now getting a new life on Ictus, and we’re the richer for it.

Yes, there are plenty of other CDs featuring these players from that period, but if you haven’t listened to any of them for a while, as was my case, this album sends the nostalgia flooding back. A smattering of band photos inside shows the players 20 years ago — could it be that distant? — Previte, Berne, and especially Feldman looking so young. What a time it was, and what a band.

You can hear elements of each player’s style in the mix, but the one who stood out the most for me was Feldman. He seems to get the biggest share of front-and-center time, often on electrified violin. Jones’ bass stands out, too. It’s always there, fidgeting restlessly under the currents.

And Zorzi? He’s not trying to be an enigma, but he’ll have to understand if American listeners like me haven’t chanced upon his music before. Plenty of information is on his web site, and sound samples, too. And you have to look for them, but his recordings are around, here and there.

You can quibble about the recording itself — the applause cuts in or out abruptly, and there are some big volume swings in Robertson’s trumpet (probably a function of him wiggling around next to the mic while playing.) But the five tracks here display some terrific playing, compelling compositional suites, and a group-mindedness that allows for intimate solo or duo segments. It all ends with “Calma e Gesso,” a sparse track rich in those soloing spaces.

Best of all? I got my copy at Amoeba SF, finding it through good old-fashioned browsing. Bang! is one of those unearthed treasures that make music shopping fun. And for Ictus owner Andrea Centazzo, I’ll bet it makes owning a label fun, too.