The Lie Detectors could be classified as a jazz duo, but in fine downtown fashion, it’s jazz with hefty shots of bombast: the heavy crunch of “Rice;” the light touch of “Go” that descends into a sinister, shamanistic guitar sounds; the echoey and folky strains of “Closer” mixed with sparse improv. Punk and metal get their say in the next track, “Here and There.” Those four track are the way Secret Unit starts.

Eyal Maoz (guitar) and Asaf Sirkis (drums) have known each since age 10. Now living in New York and London, respectively, they’re charting impressive musical careers. Maoz is a member of the Lemon Juice Quartet and Shanir Blumenkranz’s Abraxis (which got to record one of John Zorn’s Masada Book II albums), and he leads bands including Edom, Wild Type and the eclectic power trio Hypercolor. Sirkis has been playing with jazzsters including Larry Coryell, Dave Holland and John Abercrombie.

They’ve released two other duo albums: Elementary Dialogues (Ayler, 2006) and Freedom Has Its Own Taste (Fasson, 1998). They don’t seem to have used the Lie Detectors name with those releases, and maybe with good reason — the name is the top secret organization that they formed at age 10. Apparently they’ve decided it’s time to reveal the secret.

Maybe that means more Lie Detectors records to come. Secret Unit‘s varied styles are held together by a cosmic constant of jagged energy and wide-grinned attitude. “Flying Horse” gets into a catchy little groove, but not after a nifty intro of spackled non-rhythm. “Circles” plays like an improv-minded mutation of surf music, with Maoz echoing away against Sirkis’ continuous wave of rolls and snare.  Then there’s the relatively quiet noodling of “Sting” and the choppy rock anthem of “Green Shirt.” But it feels cohesive, like two people speaking the language of a decades-old secret society. 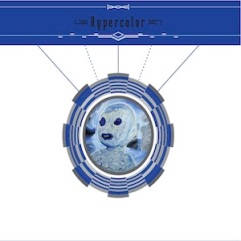 It’s easy to categorize Hypercolor as a prog power trio, one with metal leanings in the blistering guitar. But drummer Lukas Ligeti (yes, the classical percussionist; all of these guys have roots in jazz/classical) describes the band’s style as something looser. It’s about “learning complex arrangements and playing them back completely wrong,” he states in the press flier.

The music still has a proggy feel and a sense of structure; this isn’t the kind of free-form quasi-rock you’ll find on Mirakle, the Tzadik album that pitted Derek Bailey’s alien syntax with the grooves of Jamaaladeen Tacuma and Calvin Weston. But as Ligeti promises, Hypercolor breaks from the prog mold by foregoing pinpoint complexity for jamming and discovery.

The music still retains a rhythm and a spiky, edgy rock/jazz sound with, as bassist James Ilgenfritz explains it, a dash of no-wave attitude. Here, for example, is the ending of “Squeaks:”

The structures aren’t hidden. You can hear the bluesy roots in “Transit” and the pop-song flow behind “Chen,” at least before Eyal Maoz‘s guitar shifts into noisy hyperdrive. The relatively mellow “Ernesto, Do You Have a Cotton Box?” works from something resembling a country/roots framework, chopped up into incorrect measures and backed by Ligeti’s indifferent torrent of snare and hi-hat; it has the sound of a song falling apart.

“Palace” even opens in an outright punk/rockabilly spasm. Fun!

Hypercolor, the album, has its quiet side too. “Forget” is a pretty tune, although it bursts into an anthemic, thundering solo, and “Quixotic” is a slice of jazz introspection, liquidy and patient.

Then there’s the powerful 11-minute epic, “Little Brother.” Abandoning the abandon of other tracks, it digs into some reverent guitar riffing. The tone is serious but aggressive:

This is an album with a lot of facets and some blurred boundaries. Hypercolor, the band, has many more facets than just ear-splitting rock — but the ear-splitting is a lot of fun on its own.

If you’re in NYC, catch Hypercolor at The Stone on April 3, part of Lukas Ligeti’s week-long residency.