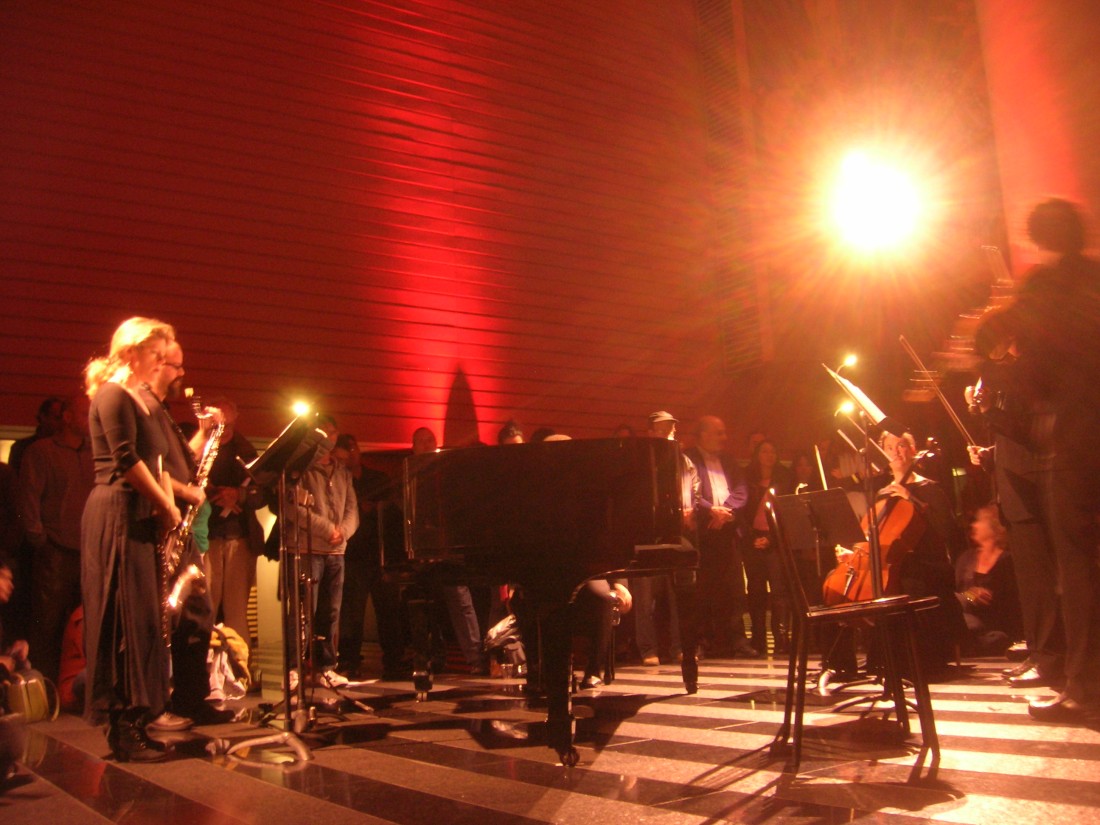 I shouldn’t have characterized Sylvano Bussotti‘s music as being “graphical scores.” After seeing some of the music up-close, and seeing Thursday night’s performance at SF MOMA, I’m pretty sure that his crazed sheet music is really meant to be read at face value.

Mind you, there’s some room for improvising and for unpredictable elements, such as when a player is told to use a forearm to smash all the low piano keys at once. But there are also moments of timed precision, matched melodies, and, especially in last night’s two-piano finale, careful coordination. 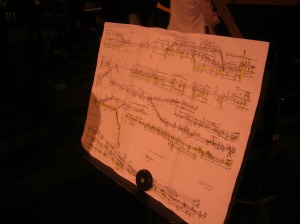 The scores are gorgeous, and they drew a lot of attention as they sat in the MOMA’s atrium lobby before the music started, attracting lots of cellphone cameras and, happily enough, generating lots of discussion, from music fans and passers-by alike. Thursday nights, the museum stays open late, so the crowd for the Bussotti concert was well into the hundreds, many of them hipster types on hand for the (unrelated) free food and non-free wine.

Everyone seemed to enjoy the theatrical setup:  Music stands and the two pianos, and some of the scores, were left out during the early part of the evening, as the crowd milled around. It turned out that the music, performed by sfSound, was to be staged in sections of the lobby, across a central strip — the opening trio being in the center, then the other small-group pieces off to the left or the right, while the audience lingered around the perimeter of this makeshift stage. People really seemed to enjoy that.

The space got best used late in the performance, for a nonet titled “AUTOTONO” that had two pianos on either end of the performance strip and the rest of the group scattered in between, a setup that was visually arresting, with sound coming at you from different directions. 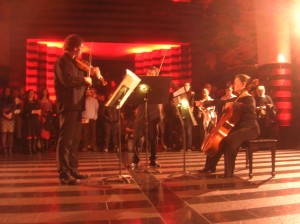 The rest of the program consisted of smaller sfSound subgroups playing Bussotti pieces from past and present. It started with a choppy, jousting string trio called “Phrase a Trois,” one of the scores the audience had been admiring beforehand. Matt Ingalls later played a solo clarinet piece, “Variazione Berio,” where he took advantage of the fact that a clarinetist can carry his own sheet music. Ingalls wandered the space, turning every so often to change the angle of the sound (it does make a difference), often stopping to let one long, 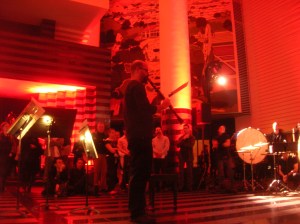 The crowd was surprisingly respectful, considering how many hadn’t come for the music per se.  Yes, there were lots of ancillary noises — doors closing (especially the front doors, as the crowd thinned during the 70 or so minutes of music), dishes being cleaned up, the occasional elevator bing. Very little conversation, though, which was admirable. I was grateful for that.

More than 100 people remained by the end, reverently sitting through the 22-minute “Tableuax Vivants,” a selection from (or a prelude to?) the opera, La Passion Selon Sade. 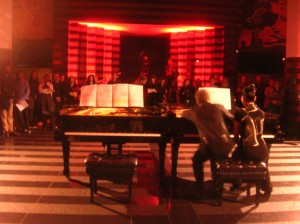 This one was really interesting.  It’s for two pianists who start by playing one piano — but they don’t just play high keys/low keys like you’d expect. They play in the same register, and more important, one player sometimes reaches into the piano to hold down a string while the other one plays, or sometimes to pluck a string. The result is that the two players are continually leaning over one another, carefully poking their arms past one another. It’s like a dance.

And it’s meant to be. “The staves (and thus the pianists) sensually merge and depart — both an essay on proxemic theory and an exquisite way of staging intimacy,” Luciano Chessa wrote in the detailed show notes we were given. (A lot of which can be read in this SFCV article: “A Rare Silent Film from an Experimental Composer.”)

The pianists — Christopher Jones and Ann Yi — eventually separated to the two pianos to complete the piece, which went on to instruct them to pluck the strungs, hit them with soft mallets, and slap them with a whip. The finale of the piece has both pianists putting away the score and playing from memory, fading out when they 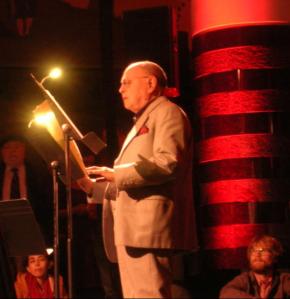 get stuck. Jones and Yi actually lasted about the same amount of time, which made for a more abrupt and solid ending than you’d expect — but it worked.

Bussotti himself was on hand, performing in two of the pieces. He spoke gruff, stark lines (in French) in “Geographie Francaise” and a more pensive commentary (in Italian) for “In Memoriam Cathy Berberian.”

And as mentioned in an earlier post, this program had started with a screening of Rara, Bussotti’s silent film, with Bussotti himself providing piano accompaniment. Most of the film consists of long close-ups of people, mostly shirtless men adorned with gaudy necklaces, tears on their faces. Bussotti’s music wasn’t as sparse as I’d expected — it jumped and leapt, then halted for long pauses. He slipped into straight tonal music on a few occasions, which was surprising — heavy sentimental chords, or slow, regal harmonies. He also had a couple of tricks up his sleeve. For example: By holding 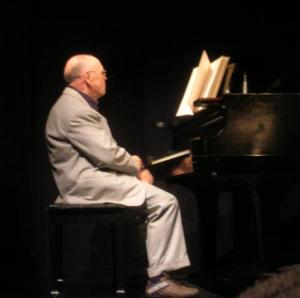 down certain keys with one hand while playing notes with the other, he created some different sounding harmonics. It was like holding down the sustain pedal for only a handful of notes — producing the same shimmering decay, but on a different chord than usual.

The film and the concert were very warmly received, and Bussotti showed a lot of energy for someone approaching 80, walking slowly but striking confidently at the piano. The program of pieces selected by Luciano Chessa created a good rhythm as a whole. Bussotti seemed to enjoy his special evening, and maybe the music got heard by some ears that otherwise wouldn’t have given it a try.