It’s been so long since I posted a radio playlist, I forgot to do one this time.

I followed up my Aug. 20 Fred Frith special with an hour of related music. The full playlist, including a “regular” hour of non-Frith-related music, is on KZSU’s Zookeeper site. The post mortem is below.

Dominique Leone — “Sometimes You’ve Got To Be Happy” — Abstract Expression (Important, 2011) ….. I started out with Leone and Novik’s bands, since they’ll be performing Gravity with Frith. Of the songs on this list, this is the only one that was sampled for the special, only because I improvised this playlist and couldn’t get this one out of my head. Actually, I’d wanted to play “Tension,” but it’s got some clearly questionable FCC content right up front.

Aaron Novik’s Thorny Brocky — “Igor Stravinsky’s Memorial BBQ” — (unreleased, 2012) ….. A band that combines upbeat jazzy sounds, a touch of Klezmer (or maybe everything with clarinet sounds like Klezmer), and bits of rock and, for want of a better word, experimentalism. Aaron sent me three tracks to use with the special. During an intermission, I’d played one that sounded more typical of the band. This one opens up noisy and rocking. Based on the title, I would guess Frank Zappa had some influence on this song.

Samla Mammas Manna — “Andra Satsen” — Supernatural Fairy Tales (Rhino, 1996) ….. The only Samla (pronounced “Zamla”) track we’ve got in the KZSU library. It comes off a six-CD Rhino compilation of prog rock. The track selection is watery (Golden Earring? Moody Blues??) but it’s got some gems and, as you can see from the Samla inclusion, some nice discoveries, not to mention Roger Dean cover art.

The Muffins — “Come With Molten Cloud” — Chronometers (Cuneiform, 1994) ….. The Muffins are a new discovery for me, and the biggest surprise is that they did so many prog songs that are only 3 or 4 minutes long! The title track to “Chronometers” does span 23 minutes and includes lots of Rock in Opposition goodness, but they also did lots of snippets, like this one, that suggest prog didn’t have to be about 8-minute-long “singles.” My mind is blown.

Fred Frith — “A Spit in the Ocean”/”Navajo” — Speechless (Ralph, 1981) ….. Hey, look, an actual Frith track! Speechless was the followup to Gravity and used the same scheme of a different band on each side: Etron Fou Leloublan on Side 1, and Frith’s New York band Massacre (Bill Laswell on bass, Fred Maher on drums) on Side 2.

Cosa Brava — “The Wedding” — The Letter (Intakt, 2012) ….. Second album from Frith’s “pop” band, seen here in a more instrumental and less “pop” light. It’s a moodier album; I remarked to Fred that it felt like a stronger Carla Kihlstedt influence, but he countered that it’s Zeena Parkins whose musical voice and ideas came to the fore this time. Hoping to write a little more on this album later.

Henry Cow — “Half Asleep, Half Awake” — Unrest (East Side Digital, 1995; orig. released 1974) ….. During the Frith interviews, much was made about how un-dance-like and un-peppy Henry Cow and Art Bears were. Which is true, but then again, I find some of Henry Cow’s work to be quite uplifiting, such as this track. After some moody piano, there’s a quice dancy-y bassoon solo from Lindsay Cooper. Frith noted that Cooper was his model for the kind of musician who can straddle the classical and jazz worlds — specifically, that line between rigorous reading or interpretation and the freedom to explore and improvise.

Toychestra & Fred Frith — “Grover Rides a Happy Honker/3 Elephants and a Cow” — What Leave Behind (SK, 2005) ….. Movements three and four of a five-movement concerto for toy instruments and electric guitar, written by Dan Plonsey. Founded by Paula Alexander in 1996, Toychestra was an all-women, all-toy-instrument band. By 2004, the five-woman band had had enough turnover that most of the actual musicians were out, leaving artists who were learning music on the fly. Inspired by that naive sound, Plonsey wrote the concerto, “What Leave Behind,” which I saw them perform at the Starry Plough sometime around 2004. The two movements I played here capture a little of everything: a serenade by the toys alone, followed by lots of scribbly Frith electricity. (For more on Toychestra, look here.)

NOT included on the show: Fred Frith and Evelyn Glennie, The Sugar Factory (Tzadik, 2007). I’d forgotten about this one. The duo played at Stanford in 2008, and I previewed the show by building a playlist around the album. You can read about that on my pre-blog site.

Gravity was Frith’s first solo album post-Henry Cow and is considered a landmark of his career — which is impressive, given his long and varied career. It’s also a bit of a departure after the art-rockisms of Art Bears and Henry Cow. Gravity is a fun and accessible album. The odd time signatures are fitted into a Euro-folk setting as opposed to the geometry of prog rock. The experimental touches and elements of “world music” that might have been new to listeners at the time emerge with an infectious joy.

A different prog/Rock In Opposition band backs Frith on each side of Gravity: Samla Mammas Manna on Side A and The Muffins on Side B. It sounds like Frith will replicate that concept by having two backing bands at Slim’s: Aaron Novik‘s Thorny Brocky, and Dominique Leone‘s band. [UPDATE: That was the original plan, but they’ve decided instead to have each song played by some combination of the bands.]

I’m planning a radio special in advance of the event. Part history, part interviews. It’ll include bits of music from Samla Mammas Manna and The Muffins — the two prog/Rock In Opposition bands that backed Gravity — as well as songs from the album itself. 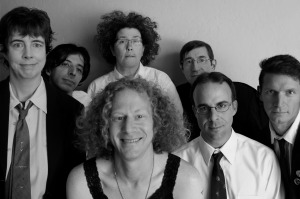 Remember the Cardiacs tribute/benefit show I was distraught about missing, back in May? Here’s my chance for redemption (and possibly yours too) — it’s Dec. 2 at the Starry Plough in Berkeley.

That’s when the band Reconnaissance Fly will again bring out their alter-egos as ReCardiacs Fly, performing covers of the UK band Cardiacs.  The bill includes Dominique Leone and Wiener Kids, who had also performed at the tribute.

What’s the big deal? Cardiacs is a rock band with a quirky punk/prog energy and a talent for unusual, complex songwriting filled with “wrong” chords — and bandleader Tim Smith has landed out of action after a stroke and heart attack. This interview with Leone fills in some of the blanks.

This show has a little more. There’ll be Cardiacs stickers for sale — newly minted by Moe Staiano, I think — and Cardiacs T-shirts for silent auction, all to benefit Tim Smith.

Here’s a video of the band in action in May. And don’t miss this review of that concert, on the Fenderhardt blog, in case you didn’t pay attention the first time I linked to it.