One instrument I never even considered getting “into” was the accordion. Not only is it associated with old, corny music, but it also creates chords with a squelchy sound that I don’t find so attractive.

Pauline Oliveros plays accordion, of course, but that’s different. Then again, it also tells you that the accordion can do more than polka.

The turning point for me was classical accordionist Bjarke Mogensen, whose solo album Winter Sketches (Orchid, 2011) got me interested in the instrument’s musical possibilities and emotional range. It’s been a few years, and while I haven’t become an accordion fanatic, I’ve found myself wondering what else Mogensen has done.

So I checked out The Song I’ll Never Sing (Decapo, 2012), a program combining solo pieces with string duets and an accordion duo. The common thread is the pen of Danish composer Kasper Rofelt.

I don’t know what really counts as virtuoso playing on an accordion. But the fast, accurate flurries on the “Vivace Corrente” movement of Concert Studies for Classical Accordion, First Book (2008-2009) sound great to me, as do the rapid-fire moments in the “Twilight Toccata” movement of Shadow Pieces. In the latter case, it’s the quiet, spattery passages that impress and thrill the most, not the big-flourish chords.


But I wonder if there’s a touch to the slow, gentle playing, as there is with a saxophone or piano. On the list of moments that should impress me, what about the thin, shimmering notes that open the track “Midnight?” What about “Nightsong 2,” played with violinist Christina Åstrand, where Mogensen lays down atmospheric chords, softly painting the background?

What’s kept me interested in Mogensen is his experimental side, which Rofelt indulges on pieces such as “Quasi Statico,” using drones and quavers to move into Oliveros territory, sounding almost like an analog-synth impersonation. In a different vein, “Light Falling,” pairs Mogensen with cellist Toke Møldrup for a tense and often subtle 10-minute piece that sometimes feels like a nighttime chase scene, sometimes like an over-the-top stage drama.

Then there’s the sparse, moody “Charybdis, played by MYTHOS, the accordion duo of Morgensen and childhood friend Rasmus Kjøller. It’s tense and aggressive, sometimes feeling like the instruments are chasing each other.

And it made me wonder whether Kjøller had any other output I could find. His career couldn’t just consist of being the “other” accordionist in MYTHOS, right? 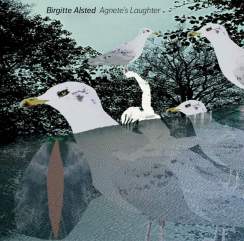 I found him on Agnete’s Laughter (Dacapo, 2013), an album of electronics and experimental-vocal pieces by composer Birgitte Alsted.Her liner notes describe him as a newcomer whose “official debut” was in 2013, in which case it makes sense that his resume doesn’t seem as long as Mogensen’s.

Amid the album’s array of ghostly, abstract electro-acoustic work, Alsted added a solo accordion composition: The 12-minute “Melancolia.” It’s full of icy drama and grand, slow emoting — and, in its latter half, soaring crescendos like this one:

Kjøller’s playing seems to hit higher and lower notes than I’ve heard on Mogensen’s albums. I don’t know if that’s a function of the type of accordion he’s playing or my own tin ears.

I do find I need a break from the accordion after a long listen. This isn’t going to become an all-consuming obsession. But I’ve enjoyed this little detour — and I haven’t even gotten to the real jazz/improv accordion heroes, Guy Klucevcek and Rüdiger Carl.

In a 2012 New Yorker essay, Mike Spies considered what’s lost when we have so much music so freely available online.

Music isn’t as treasured as it used to be, because it’s no longer an endeavor of effort and luck to get our hands on it, he argued. “I don’t think it’s a coincidence that, over the last half decade, very few new albums have stuck with me — I just don’t spend the time with them anymore.”

I sympathize. When buying physical CDs and records, the randomness of something being there helps me savor the discoveries, partly by limiting the input. But it only works with a handful of items. Whenever I come out of a store with, say, a dozen CDs under my arm, I find half of them unlistened-to months later.

It’s as if the seeking and digging, and the time spent in the store considering, creates a well of potential energy that’s infused into the music.

On the other hand, Internet delivery creates the option of instant experimenting.  I once saw an ad in Gramophone for a solo album and solo Carnegie Hall concert by Bjarke Mogensen, an accordionist. Solo classical accordion! What could that possibly be like, and would it even be bearable? In the past, I’d stare at that gorgeously stark album cover, and I would wonder, and that would be the end of it.  But now … I sought out the album, Winter Sketches, on eMusic and gave it a listen. And ended up buying the whole thing. (It’s quite enjoyable, by the way.)

I revel in that speedier process of discovery, too. And yes, the fact that it’s cheaper helps.

But I’ll always love record stores, and bookstores, and the tactile experience of searching and learning. I’m grateful to live in an area with substantial record stores — Amoeba, Streetlight, Rasputin — and I savor what little browsing time I can get.

Every generation sees some of its greatest loves obsoleted — processes, objects, skills, artistry. Things that transcend tradition and habit. Maybe record stores aren’t any different. But given how many people share my sadness about what’s being lost, it’s clear that the love of records runs especially deep. The disappearance of record stores is like a piece of our souls being taken away. There are benefits. But we’ll mourn for what’s lost.

P.S. Regarding eMusic — note that I’m talking about music being inexpensive, not free. Big difference, as Ben Allison articulates here.

P.P.S. Turns out Bjarke Mogensen has a new album coming out next month.