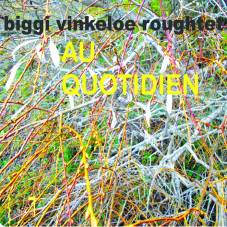 You should hear this album for the friendly vibe of its quartet, their balanced approach to improvised jazz, and the solid interplay on the two live tracks included at the end.

But I’d also be happy if you read the liner notes, either with the physical CD or on Bandcamp. I happen to find them deeply insightful. And yeah, I also wrote them.

Which creates an interesting opportunity: I can review this album by plagiarizing myself. Man, is this going to be easy.

Vinkeloe, from Sweden, has been a frequent visitor to the Bay Area and a longtime participant in the music scene here. She’s also been involved in some interesting projects lately, including the Swedish jazz group Amazonas and her own Jade project blending the moods of jazz with choral sacred music.

Au Quotiden is more like a meeting among friends, a mood that makes for a light and lively session.

“Au Quotidian mixes the confidence of the familiar with the excitement of the unknown, the musicians keying off one another’s invisible cues to create a fluid, elegant machine,” I wrote.  (“Invisible” was a poor choice of word, as visual cues, even the kind that simply signal the end of a piece, probably played a large role during the recording session.)

“The band gets a ‘jazz’ infusion from [Joe] Lasqo’s piano chords, adding spots of color to a stormy track like ‘i would think so’ or the slapped groove of ‘je ne sais pas.'” (The song titles are entirely lower-case.)

Let’s see if I was right. Here’s an excerpt of ‘i would think so.’

I should mention that Donald Robinson on drums is a crucial part of this chemistry; he’s played with these musicians for years, including Vinkeloe. Check out Blue Reve  (Eld 2009), a trio album with Robinson, Vinkeloe, and bassist Lisle Ellis.

Au Quotidien is appended with two live tracks that feature some particularly lively interplay. Again, from the liners: “‘how wonderful'” features Vinkeloe’s joyous yet balanced overblowing and a full palette of sounds from Robinson.”

Here I’ve combined a couple of segments to give you a feel for all that:

To conclude: “throughout the album, Vinkeloe herself leads the crew through varying moods — the spiky excitement of “vous ne comprenez rien,” the dark, unhurried mystery of “cela commence mal.” She spins powerful tales herself on the horn, but this band carries those talents to another plane — four storytellers, weaving a narrative together.”