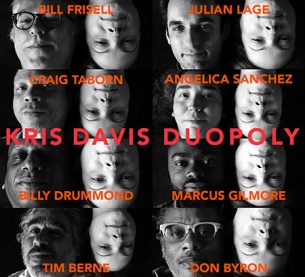 I wanted my first listen to Kris Davis‘ Duopoly to be an uninterrupted viewing of the 80-minute video of the performances (available online or as a DVD sold with the physical CD). It’s not as if the act of filming these studio duets altered the music. It’s more that I wanted to get into the spirit of the project.

Duopoly comprises 16 duets with eight musicians. Some Davis knows well, but none have previously recorded with her. Each musician took three hours in the studio to record one composition (most often one of Davis’) and one improvisation. Topping it off is the mirror symmetry of the track order, which I was so pleased to hear about last summer — the album features each of the eight musicians playing a composition, then the same eight, in reverse order, doing improvisations.

To me, that whole structure is part of the art here. It isn’t just that Davis recorded 16 duets (the partners being two guitarists, two pianists, two drummers, two reedists). What I wanted to savor was the whole “shape” of the project — the constraints, the spontaneity, and the trajectory of the overall process. Certainly I enjoyed the music, too, but what I savored was the overall experiment.

The recordings are pure, with no rehearsals, overdubs, or mixing — although, sensibly, multiple takes were allowed. On the video side, the amount of camera movement is minimal. Davis is recorded by a fixed camera, while the guest musician is filmed by videographer Mimi Chakarova, using a handheld. Not every track works for me, but I think that fit the spirit of the rules.

One of the most fascinating visuals is “Eronel,” the Monk composition, played in duet with Billy Drummond. Davis starts off with an improvisation, and it’s up to Drummond to trust his ears, decide when to come in, and listen for the composition. The same is true of their improvisation, but with one constraint fewer. Being able to watch Drummond’s facial expressions, seeing him tease out his process, is a treat.

At times, though, he seems to have psyched himself out. I found myself aching for him to cut loose in a few spots. His improv duet takes time to get going but really cooks when it does, when he settles on an all-toms groove.

It’s possible that Drummond did cut loose, on alternate takes — or, maybe restraint was his strategy all along. Or, maybe it’s my burden to warm up to that strategy. The quiet tapping at the start of “Eronel” really clicked with me on a second listen, without the video (opening a whole other realm of discussion), and provides a healthy contrast to Marcus Gilmore’s hard asphalt swing on “Dig and Dump.”

The dual-piano tracks likewise complement one another. Davis’ composed duet with Craig Taborn, pensive and abstract, is followed by the direct jazz attack of Angelica Sanchez. I like that the Taborn track comes first in the album’s sequencing. It does get fiery but builds slowly and abstractly to that point; its introduction would have been an odd full stop had it followed Sanchez’s piece.

Sometimes, the only way to tell which parts are composed is to watch Davis’ eyes on the video. Even then, you can’t always tell, but based on that cue, “Trip Dance for Tim” has her playing an intricate theme filled with insane intervallic leaps. Tim Berne’s alto sax soloing is a delight during that phase, and eventually both are playing a layered composition that does resemble some of Berne’s two-horn work with bands like Snakeoil or Bloodcount.

How about the guitars? Davis’ composition “Prairie Eyes” seems very much tailored for Bill Frisell, with Davis laying down scrabbling minimal riff against his sparse notes, or putting big-sky chords behind a very Frisellian melody. It’s an attractive piece with a haunting coda. “Surf Curl,” for Julian Lage, starts out percussive and skittery, building into a steady drizzle.

Duke Ellington’s “Prelude to a Kiss,” played with Don Byron, is the halfway point, the last of the compositions. The piece ends sublimely, making for a satisfying transition into the improv half of the album/video. That Moebius twist of a transition, as Davis’ producer calls it, is equally sublime, opening quietly with Byron’s clarinet like a flowing brook and Davis playing gentle dewdrop notes.

Davis has posted the entire video online: http://krisdavis.net/duopoly-full-video … and you can catch it segment-by-segment on Vimeo.