Mostly Other People Do the Killing — Loafer’s Hollow (Hot Cup, 2017) 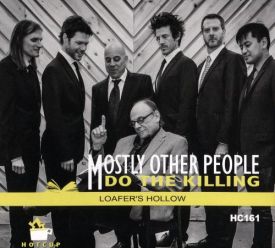 How old is Mostly Other People Do the Killing? Old enough that they once had a Myspace page (and possibly still do).

How old is this blog? Old enough that when I reviewed the band’s third album — the very album reviewed on the blog — I mentioned their Myspace page unironically.

Say what you will about the blog, but the band has aged well, evolving and experimenting while still adhering to its original formula: Mixing styles that pay homage to jazz through the ages, while naming every track after real towns in Pennsylvania. Expanded to a septet, the band goes even deeper with the energy and twisted creativity that have been its hallmarks.

After 13 years and now 10 albums, you’d think bassist Moppa Elliott, the band’s leader and songwriter, would be out of amusing names — but no! He’s not only kept up the trend but has also found towns that relate to five great authors. The result is a five-track span of Loafer’s Hollow that suddenly becomes a book club: “Bloomsburg” is dedicated to James Joyce, “Kilgore” to Kurt Vonnegut, “Mason and Dixon” to Thomas Pynchon.

Moreover, each of those five compositions is based on music that Elliott set to the authors’ words. (Loafer’s Hollow, by the way, is original name of a town now called Library.)

Musically, you can’t tell. The touchstone era for Loafer’s Hollow is the ballroom-stomping jazz of the ’40s. The music carries a “hot club” feel, and Brandon Seabrook’s banjo is a nicely bucolic touch.

The layer on top of that, of course, is madcap free jazz. So you get Jon Irabagon’s soprano-sax babble to start “Five,” or an impossibly long pause on “Kilgore” where he creates the smallest sound possible out of his horn, a subliminal creak that’s the unaccompanied introduction to a wild solo. Or Ron Stabinsky, on that same track, gradually going insane on the piano, staring out with a a rapid boogie-woogie vibe that gets even faster, then starts to wobble. The suspense is palpable.

Trumpeter Peter Evans has left the band, but replacement Steven Bernstein is a known quantity and obviously no slouch. He gets to declare his presence early on the album with an unaccompanied solo on “Hi-Nella,” starting with an impressively sustained high-pitch siren sound. On “Bloomsberg,” he and bass trombonist Dave Taylor (another crucial veteran added to the lineup) trade licks in a comedic bit of one-upsmanship.

The band has a smart-aleck reputation, but they’re earnest in paying homage to old jazz styles. You get to hear that side on “Meridian” (the Cormac McCarthy piece), an honestly good, straightforward song with a nostalgic mellow tint and a hardy beat. (Oh, and a Seabrook banjo solo that sticks to the way-up-there upper register, where the notes come out like tinny clicks.)

Loafer’s Hollow will be released on Feb. 24.