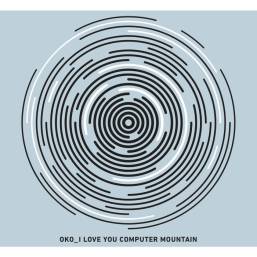 Back in March, Tim Berne got invited to Dublin to play with the electronica band OKO. Asked by the Irish Times about his musical plans for the gigs, he said he had no idea. OKO hadn’t revealed a strategy, and it sounded like Berne had been given only surface details about what the band even sounded like.

But the Irish Times article dropped a few hints. Oko plays with electronic and acoustic instruments. They’re experimental and cross-genre — well, yeah, the press loves to put those labels on bands that turn out to be bland and monochromatic.

Ah, what the heck. In the spirit of the Berne concert, I downloaded I Love You Computer Mountain and gave it a shot.

Turns out the Irish Times wasn’t far off.

“Shoehorns & Axelgrease” opens the album with a nine-minute tour of the quartet’s collective digs. It starts mysteriously, with cavernous gloopy noises accompanying light ambient chords and faint electronic blips. The music eventually surges into a sprawling, cymbal-splashing slow groove, then takes a sharp turn into a kind of prog-jazz jam of electric piano, snappy rhythmic bass, and colorful drumming.

“Under Over” brings a madcap beat lead by rubbery bass, over which Darragh O’Kelly jabs out some funky electric piano before switching into a scrambling, odd-time-signature riff. We’ve gone from oh-so-hip electronics to a good old prog/fusion festival.

You could describe the overall album as “chill,” but it gets a lot of mileage out of some hard-driven bass and drums. The former comes from Shane Latimer on eight-string guitar — a compelling, lively sound, even when he’s playing in linear eighth-note pulses. Shane O’Donovan lays down solid beats and colorful fills on the drum kit.

O’Kelly’s keyboards, principally electric piano, provide the lead voice and are responsible for defining mood. It’s all augmented by samples and whatnot from DJackulate for a touch of hip atmosphere.

Tracks transition neatly into one another for a kind of cerebral dancehall experience. You travel from room to room like one of those amusement park rides — through the reggae-infused cooldown of “Axelgrease;” the impossibly slow fog of “Oblong,” with Latimer laying down some other-wordly guitar against blurry gray backgrounds; and the snappy yet low-key yet spastic “Magnet Paste.” It winds down sublimely with a pretty tune called “Unbelievable Sushi.”

Tim Berne would be an obvious match for the more abstract tracks, but I’d bet it was amazing to hear him on the more locked-in and composed pieces as well. He’s no stranger to more conventional music, after all — check out his work with bassist Hugo Carvalhais’ band a few years ago. If you happened to catch any of the shows, I’d love to hear what you thought.