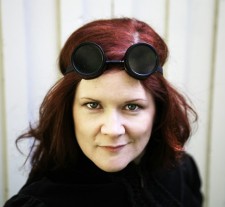 It might sound incongruous, pitting modern jazz styles against words written a century ago. But with an ace 15-piece band, some thoughtful video from four artists, and Fay Victor on vocals, Mezzacappa has created an exciting and uplifting production.

It really is a production, as I saw on Thursday night. Mezzacappa developed the song cycle during the course of this year, a process that included not only writing and rehearsals, but live previews at the de Young Museum and a research visit to the Louise Arner Boyd archives in Marin. She blogged about it all, and it sounds like it’s been quite a rush for her.

The band combines top-notch musicians from northern and southern California. Alongside a team of Bay Area favorites, it includes Myra Melford, Mark Dresser, and Vinny Golia, along with Nicole Mitchell, a stalwart of Chicago’s AACM scene who now teaches at U.C. Irvine.

Then there’s Fay Victor, who inspired the project after impressing Mezzacappa during a 2011 performance together. Based in New York, Victor sings with a voice like Betty Carter’s but also has a penchant for experimenting. Her albums in the mid-2000s includes elements of psych rock and free improv, and she’s more than willing to experiment with sounds.

The lyrics she’s singing are taken from the writings of women who broke with the customs of the 19th and early 20th centuries to explore, whether for science, for adventure, or “for anything but awaited them in their suffocating Victorian parlors,” as Mezzacappa writes in the show program:

“The fact that there was no contemporary precedent for how they chose to live their lives, and the great lengths they went to live so fully off-script, resonated with me enormously.”

The show got its official debut Sept. 25 at U.C. Irvine, followed by a performance at Los Angeles’ Angel City Jazz Festival. The Oct. 1 and 2 shows at Brava Theater might sound a little less prestigious, but it’s a lovely theater with an expansive stage that suits the video projections well.

Some highlights of the music:

“Heat and Hurry” displayed a quick-stepping, sophisticated kind of jazz. It was one of a few songs backed by the cut-out animations of Kathleen Quillian — think Terry Gilliam with less silliness and with varying landscapes in the background (jungle, mountains, Hawaiian lava bed). The song was inspired by world traveler Isabella Bird, who “literally fell ill whenever she returned home to the British Isles of her birth,” as Mezzacappa’s program reads.

“Taxonomical” made use of Victor’s creative use of sounds and inflections, because the lyrics are just scientific names of plants in Greenland. It’s from the journal of Louise Arner Boyd, a biologist who lived in Marin and developed a fascination for the Arctic Circle. Her list made for some creative vocal babbling, after an introductory duet that contrasted eerie laptop sounds by Tim Perkis with some brisk vibraphone statements by Kjell Nordeson.

Boyd and Bird showed up again in “Shut Out the Sun,” which set one of Bird’s poems against actual video footage that Boyd took in the Arctic Circle. The song featured swaying horn harmonies and attractive piano chords — and later, a sublime flute solo from Mitchell to go with the ice floes and glaciers of Boyd’s journey.

“Soroche” drew from the weird rivalry of Annie Smith Peck and Fanny Bullock Workman, mountain women who were intent on setting world records and got into some heated arguments in the Scientific American letters-to-the-editor column. Victor read just a few phrases, repeating them and twisting them all about with her voice. Later, Mezzacappa and Dresser got into a brief duet, the two basses battling in a frenzy as if to replicate the argument. That was a fun moment, and Dresser continued playing for an equally fun duet with Victor.

“City of Wonders” closed the show with some upbeat music and somber thoughts. The writings, by Ida Pfeiffer and Marianne North, reflected on the negative aspects of the California gold rush and the carving up of redwood forests, respectively — two subjects familiar to anyone who grew up around here. The bouncy and brisk piano/vibraphone lines soon cut away to a swinging, old-timey jazz theme with some cool solos from John Finkbeiner (guitar) and Dina Maccabee (violin).

With professional lighting by Allen Willner and with Bay Area musician Suki O’Kane controlling the video, Glorious Ravage had the look that a major work deserves. There’s one more chance to catch it. And check out Mezzacappa’s interview with KALW-FM to learn more about the show’s historical aspects.