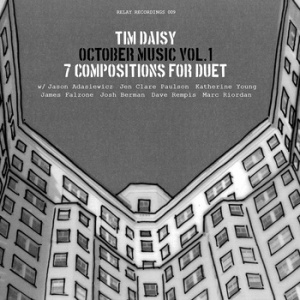 In addition to being a first-call free-jazz drummer on the prolific Chicago scene, Tim Daisy is also a composer. For October Music, he’s sketched duets to play with seven hand-picked partners, pieces seemingly built to play off their strengths. It’s got some serious moments but overall feels like an opportunity to just enjoy making some music with friends.

Many of the sessions come in a jazzy vibe — especially “Writers,” a spirited free-jazz romp with Marc Riorden on piano. It quickly gets into a sprint, with Riorden’s knotted piano improvising racing against Daisy’s fleet, subtle drumming. The composed theme, when it emerges, is a skeleton staircase of rising notes, setting the stage for a second round of high-energy improvising.

“Roscoe St.,” with Dave Rempis on baritone sax, seems like a nice reflection of Roscoe Mitchell’s many facets, a combination of burly, swinging saxophone and warbly experimental sounds. “For Jay” likewise slips through a few mood changes, from a sprited jazz-improv duet to a more careful space where James Falzone’s clarinet paints images of stillness against some astoundingly fast vibraphone — Daisy showing off some serious high-precision rolls on the sustained notes.

Other pieces opt for a modern-classical sound. “Some Birds” features Katherine Young, who’s explored the outer limits of the bassoon. It’s a calm chamber piece with vibraphone, presented with care, as if you were watching the assembly of a delicate and carefully balanced structure. “Near a Pond” is a studious piece where Jen Clare Paulson plays some sad, folky melodies on viola but also gets a moment of scratchy, whispery experimentation, adding to the overcast feel. It all culminates with a surprisingly vibrant marimba solo.

Vibraphone takes center stage on “For Lowell,” with Jason Adasiewicz at the hammers, playing bright, cool splashes against the palette of Daisy’s drum kit. “Painted,” with Josh Berman on cornet, is a reflective ending, played at a decently chipper clip but with lots of white space, created mostly from Daisy’s restraint on the drum kit. It’s not exactly sad, just very thoughtful.

You can find a more of Daisy’s composed or improvised musical ventures on Bandcamp. Here’s a dash of the aforementioned “Writers,” with Marc Riorden on piano: