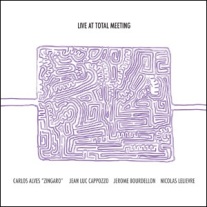 I love not only the sounds, but the pacing on the three long improvisations presented here. It’s a live performance from France’s Total Meeting Festival in 2010, and the quartet draws a rich variety of  ideas from their acoustic instruments.

Most of the music doesn’t appear to move blazingly fast, and yet there’s a building sense of energy and tension that’s rather captivating. The players manage to sculpt narrative arcs that draw you in. On top of that, the album ends with a sudden and mildly surprising flourish that leaves you feeling pretty good about everything you’ve just heard. (I won’t give it away — it’s not that unusual an ending, just very sudden. I got a smile out of it.)

The first and last tracks (“Total 1” and “Total 3”) feature Jerome Bourdellon’s flute taking command of the setting.  “Total 1,” has him playing in a sparkling, energetic mode, reflecting off of Zingaro’s violin and making you wonder why flute doesn’t come up more often in free improv. He’s takes the lead voice during some softer phases, where the flute takes on that calming voice, especially in the lower registers, but he can also dance and dart to play against Zingaro’s madman violin sounds and Jean Luc Cappozzo’s trumpet. Listen to him hold down the low registers here, gradually stepping into the background:

My ears kept gravitating toward the trumpet and the flute (or bass clarinet), but there’s plenty of drums and violin as well. Plenty of Zingaro, in particular: sawing, plucking, and romantically swooning. As often happens with improv, no one voice takes the lead for any long stretch. This is a thoughtful group effort.