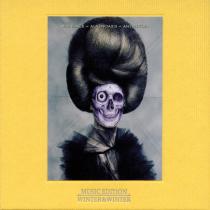 Alas No Axis is essentially an indie rock outfit that happens to have a clarinet, and Antiheroes sticks to the same ingredients that have made rock stars out of the band.

You often get a catchy melody laid down by the guitar or even the bass, topped by Chris Speed playing sax or clarinet in his languid, drifting mode, often more a backdrop than a lead voice. Other songs tip their wings into noise territory, with Hilmar Jensson’s guitar providing a fuzzy haze that only hints at the melody. Black’s drumming varies between bashing and subtle, depending on each composition’s desired mood. It’s all familiar, but just as with a rock band that’s got a successful sound, it still works.

Despite the off-putting cover, the quasi-title track “Antihero” opens the album in a state of peace, a slow sunrise melody on tenor sax. It’s a risky way to start things, but then again, “Antihero” might have gotten lost if it were buried on Side 2, so to speak.

Things get noisy enough from there. “Much Better Now” is a mini-suite that features a quirky, bouncing clarinet theme and another friendly, folky melody. “Tockle” is noteworthy for being a non-pretty track in a pretty setting, calm and serene in its ugliness.

Of the song that are closer to outright rock, “Super K’s” is the most tuneful, but I’m partial to “Marguay,” where a pulsing bass beat is augmented by shards of glass out of Jensson’s guitar. Speed sticks to a chilled breeze on sax there, but the rest of the band is tearing it up.

The album ends with “Square Pegs,” a slow burner that’s like a sunny take on Sunn_0)))). The toneful, droning wash almost obscures the fact that there are chord changes and a beat, and it’s all followed by a long, long fade-out

I was thinking during my first listen that Antiheroes had less emphasis on melody and greater use of noise elements than previous albums, but revisiting the last two albums, Houseplant and Dogs of Great Indifference, I’m not so sure. With each listen, my ear seems to gravitate toward different aspects of the music — the writing, the effects, the drumming. Maybe the band’s depth is what keeps the formula so rich.