SCLOrk, the Santa Clara Laptop Orchestra, performs Thursday, June 6 at 5:30 p.m. — for free! — at Santa Clara University’s Recital Hall in the Music & Dance building. It’s at the corner of Lafayette and Franklin, next to Mayer Theatre. More info here.

It’s a lazy May afternoon as Music 157 convenes in the Recital Hall of Santa Clara University’s Music Building. Ten sets of sitting pillows are carefully set up, lining the front lip of the stage, each station accompanied by a low table adorned with a Dell laptop. Behind each station, and just to the side, is one expensive-looking speaker. The pillows look comfortably meditative, but the taller students are having trouble contorting themselves into position.

This is the Santa Clara Laptop Orchestra, nine students who have been meeting weekly, two-and-a-half hours every Wednesday, to work on the concert they’ll perform on June 6, on this stage. It’s the brainchild of Bruno Ruviaro, an assistant professor who’s recently come to Santa Clara by way of Stanford’s Center for Computer Research in Music and Acoustics (CCRMA).

There were no warmup lectures about theory, method, or history — this is all about creating something as a group and getting one’s bearing with a new musical instrument. “Every class is a rehearsal,” Ruviaro tells me. 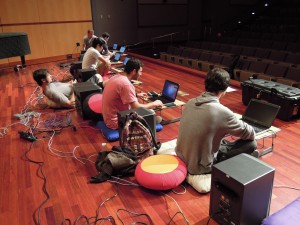 A traditional orchestra starts by tuning up; the laptop orchestra begins rehearsal with the players trying to get applications to boot and strugging to make sure they’re all using the correct sound files. It’s all very chilled-out; this isn’t a frenetic Apollo 13 situation room. “Is it ‘T_sample’ or just ‘TSample?'” “Try quitting SuperCollider.”

Ruviaro, wearing his trademark cap, pops in and out as students help one another set up. A few of them catch on, and small sounds burble up from the speakers: sonar blips, rainstick rustling. It’s very much like the doodling of an orchestra warming up.

By about 3:45, everything is in place, and the class discusses how they want to set up their first piece,one composed by three of the students. It involves five distinct sounds, each assigned to a pair of performers who will start playing two by two, starting with the outermost pair then working inwards. Each pair will then stop playing, then restart in reverse order, creating patterns of silence-then-noise that the audience will be able to follow. 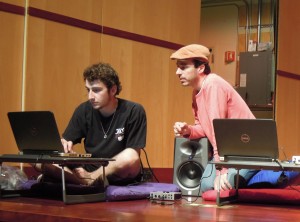 The first rehearsal starts. Sounds bubble up, one after another, then drop out subtly. At one point, someone triggers the wrong sample — always a danger when it comes to laptop music. During the peaks, with all five sounds running, it’s a nice pastiche, and the halfway point, featuring only the two middle players and their tribal-sticks percussion, works well as a dividing point, a chance to assimilate the music so far.

“What do you guys think?” Bruno asks, once it’s done. “I like the sounds but would like a more formal shape to the piece,” one student says. Most agree that timing is an issue — a faster spacing between entrances or exits would help the audience hear the progression in the piece. There’s discussion about how to cue one another, so each pair can make its transition simultaneously. Oh, and a pro tip: Take your hands off the keyboard when you’ve stopped playing, as a cue to the others.

Classes like Music 157 aren’t classes in the traditional sense. The Laptop Orchestra is all about one performance — June 6 — preceded by 10 weekly rehearsals. Along the way, students learn about the laptop as an instrument and gain the experience of playing in a cooperative ensemble (something at least a few have done before; one student is in the Santa Clara jazz ensemble that will take over the stage after this rehearsal). They’ve learned about performing, about listening, and a little bit about programming and creating sounds in applications like SuperCollider and Pd-extended.

Ruviaro isn’t much older than the students. Originally from Brazil, he came to the United States determined to study electronic music, enlisting at Dartmouth and later moving out to Stanford, where he was part of CCRMA.  It’s his second quarter teaching at Santa Clara and his first time convening the Laptop Orchestra.

His role is more as an experienced colleague than a professor, guiding the process more than controlling it, and all the time encouraging them to experiment and to hear. “The sounds that are more sharp and pointed, you can play more with — think of when you want to play more and when maybe silence is better,” he tells them at one point.

They run through the students’ piece a second time using a synced-up stopwatch on the laptops. The shape of the piece emerges more definitively, but the difficulty of knowing who’s playing or not becomes an issue: Three players drop out at once, instead of one by one as a wave. Each player’s sound field is dominated by the speakers nearby, so it’s hard to tell who else is playing (and, as will become clear during other pieces, it’s all to easy for someone to be making noise without realizing it.)

“Perhaps we don’t need to look at the stopwatch. It’s more the duos looking at each other,” Ruviaro says.  One of the writers also suggests that the first wave, the entrances, spread out more slowly, as more of a setup.  Changes in volume would add some welcome variety too, Ruviaro says.

Different pieces in the concert highlight different ways of using sound, and they also expose the students to a range of interfaces and programming tools. While this first piece is about individual sounds, for example, “What Happened in Salt Lake City,” written by Ruviaro’s colleague Alex Christie, is more about the collective mass.

“Salt Lake City” started as a conducted piece, but Christie has decided to trust it to the ensemble’s sense of timing. They’ll be cross-fading from one group of sounds to another, eventually moving out of the crinkly, chaotic noises and into the hum of oscillators, which will fade down to the sound of the students’ own humming. Christie gives the first movement a listen from the center of the theater — because, perhaps more so than with acoustic instruments, an electronic ensemble sounds different depending on where you’re sitting. “It sounds great, but people are going to hate it,” he says gleefully. “It is high-pitched sounds.”

Ruviaro’s own “Grain Master Scratch,” originally titled “Wheels,” uses a 3×3 grid of pre-programmed sounds, so that students will just click each square and then bend and twist the sounds by moving the cursor around. It’s filled with noises resembling Formula 1 cars revving up or careening around corners in slow motion, so when its turn comes up later in rehearsal, students have fun warming up to the sounds of their own virtual racetrack.  “Move to different corners and see what you get. Learn your instrument,” he encourages them.

The group has a say in every piece’s shape, and in the case of “Scratch,” they’re helping Ruviaro decide on an ending. One of his presets includes a smooth-jazzy loop that could be a candidate. The students start looking for it — the mouse has to be at the equator of the screen, about three-fourths of the way to the right — and as they find it one by one, an interesting effect forms from the out-of-phase loops. That could work, they agree.

One big difference between computers and normal musical instruments is the level of control. You know when a violin will make noise, and what kind, and you can always make it stop. Laptops, less so. More than once, someone doesn’t fade out completely and doesn’t realize they’re the culprit.

And always, there’s the struggle to listen. It takes concentration enough to hear what you’re playing; add to that the brain-cell cycles to absorb and process what else is going on, whether it presents the cohesive front you’d like, and what you can do about it. Multiple times throughout the afternoon, Ruviaro — who’s often pressing the ensemble to play louder; some sections are still coming across too timidly — reminds them they can also throttle down.  “Leave some empty space to listen the others,” he says.

Similarly, Christie tells the ensemble that class time is a good opportunity to practice listening and reacting. “If you feel you and your neighbor are creating an interesting polyrhythm, then go with it,” he says.

On the third run of the students’ piece, the careful two-by-two introduction of sounds really works. The final fadeout is still a bit choppy, but the last of the sounds, a pulsing heartbeat that began the piece from the stage’s edges, lingers nicely. Bruno says he’d like to hear more volume from the central duo, and he’d like them to rehearse getting the tribal sticks to establish a beat versus “fighting against the machine” — in other words, getting the unsynchronized computers to sound more like natural, acoustic instruments.  It’s also decided that the Morse code and sonar sounds should switch places. Everything is still in progress, and everything is up for discussion.