I’d read that I should expect Tap to sound like a Pat Metheny record, considering each track consists of Metheny overdubbed on Metheny, adding only Metheny’s drummer (Antonio Sanchez) to glue it all together. Well, OK then. What happens when Metheny fills your ears but mind of John Zorn is pushing  the buttons?

This is not another Song X or Zero Tolerance for Silence — that is, Metheny fans won’t cover their ears. You could mistake any one track for a Metheny original that happens to have some Middle Eastern influence to it.

But while the whole album carries his unmistakable sound, it seems to me Metheny also took seriously the mission behind the Book of Angels albums — that is, he’s trying to extrapolate the possibilities lying inside these Zorn compositions. That means covering them with his own fingerprints, yes, but he also cuts loose in ways that fit the Tzadik mold, and he uses a variety of guitars to create different sounds and personalities — it’s as if he brought a few different bands to the gig. The result is a really good album.

Metheny’s trademark cinematic soaring? It’s in there, in places. But a track like “Mastema,” the opener, also serves notice that Metheny is opening the creative box. It’s a pleasant, upbeat song, based on an ostinato that’s maybe spikier than Metheny’s usual melodies, and a driving beat by Sanchez that gets the blood flowing. With a bit of imagination, you could hear Zorn and Dave Douglas playing the short main theme in unison, flexing that Klezmer scale.

For most of the piece, Metheny solos over the main pattern — rocking out, basically, and it sounds great. He doesn’t use the usual synth-horn guitar; in fact, what Metheny adds is some hard-rock distortion on one of the soloing guitars for some unexpected punch. It’s later in the song that Metheny unleashes a staticky, scribbly guitar — like controlled feedback, played at an almost subtle volume, an edgy touch that tells you this album isn’t meant to be Masada Lite.

Similarly, “Sariel” opens in a traditional, folky vein and follows the arc of a typical Metheny song. Toward the end, though, it turns into an electric Metheny freakout over intensely strummed, zithery cords. The finale is a two-minute crash like an airliner coming apart in slow motion, with Metheny grinding away at electric guitar and Sanchez splashing a collision of drums into the foreground once in a while. 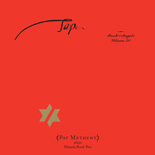 A more normal Metheny shows up on the mellow, acoustic “Albim,” where he picks at a slow, gentle melody that’s allowed to unfold at its own pace. The song’s Klezmer roots twinkle in a comforting Spanish-guitar solo. The backing guitars are breezy, the drums a smooth rock bed.

“Tharsis” is jumpy, springy fun, probably in criss-crossing time signatures (it’s going to take another few listens for me to count it out). During a slower, airy stretch, we get full-force Metheny; here’s where the synth-horn guitar shows up, and the small metallic percussion to mark the beat (an effect he’s used for decades), and the sweeping cymbals in Sanchez’s drum work.

“Phanuel” is the slow, creeping one: dark shades and drifting metallic tones that eventually give way to the comfort of a slow, tender acoustic guitar. And Metheny apparently plays piano (or possibly MIDI-triggered piano via guitar) on “Hurmiz,” something I don’t think I’ve ever heard from him. That track is just the piano and Sanchez, blasting away gleefully, and it’s something you won’t find on Zero Tolerance, The Sign of Four, or any of Metheny’s other infamous albums. This track, or the closing of “Sariel,” are the places to start if you’re just out to annoy your Metheny-loving friends.