So, I was listening to Tyshawn Sorey‘s Oblique I (Pi Recordings, 2011) on shuffle play — a tool I’ll often use when I don’t have more than 10 or 15 minutes to listen to music. 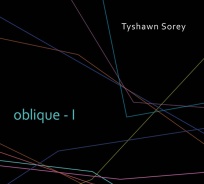 Tracks 10 (titled “Thirty-Six”) and 8 (titled “Twenty-Five”) came up first. They happen to be the only two where John Escreet plays Fender Rhodes electric piano rather than acoustic piano, and they follow a similarly sparse strategy.

The transition between them was pretty cool. I’ve edited it into the soundbite below. Keep in mind that it’s the sound of “Thirty-Six” winding down followed by “Twenty-Five” making its initial explorations. It gets pretty quiet:

Well, I thought it sounded cool, anyway. Maybe you had to be there.

Now, I don’t know if the two compositions would truly work as a suite. I suppose a lot of suites operate in halves, as sides of a coin, but having gone back and listened to the combined 15 minutes again, and when you do that while thinking of the pieces as “matched,” the cohesion isn’t there.

“Twenty-five” is considerably slower and has different aims: It’s about a languid atmosphere, whereas “Thirty-Six,” for all its pensive qualities, keeps one corner reserved for flat-out blowing. “Thirty-Six” starts with Rhodes floating up some chords against Sorey’s drumming but then the Rhodes springs into in an attack-mode solo as Sorey fires sparks at the kit. Loren Stillman’s alto sax appears after about four minutes, adding new color with the sudden splash of dye thrown into water.

These are the only two tracks with Rhodes, so they needed to be spaced apart on the album. And I think they’re well served by being later tracks, due to their deliberate pacing and their long stretches without the sax/guitar front line.

To state an old lesson in an old-fashioned way, you make some fun discoveries when you take time to listen to Side 2.

If you’re wondering about “Side 1,” meaning the complex and, yes, oblique composing and the drum bombardment you’d expect from Sorey, Oblique I does deliver. Not every track carries the battle-stations urgency of “Twenty,” which opens the album…

… but you still get plenty of dynamic interplay and soloing. The modern and challenging compositional elements are sometimes overt (horn/guitar unison lines) or latent (you get the feeling something organized is happening but can’t pinpoint it).

It’s thoughtful music that still gives the players a chance to howl. Tints of Steve Coleman, Henry Threadgill and Anthony Braxton — all namechecked in Sorey’s liner-notes essay — are evident. He also lists Bartok, Schoenberg and Stockhausen as influences.

Here’s a beefy compositional segment from the piece, “Forty.”