At no point did it occur to me that all four Nels Cline Singers shows at Duende would be sold out, but they are.

A couple dozen tickets are being released each night, so you can still see them through Saturday. Just hang around the bodega (coffee/wine bar) part of the restaurant a couple hours before the 9:00 p.m. show. (That recommendation comes from the Duende Facebook page.)

Each show includes one set of the Singers trio and one set with a special guest added — Ben Goldberg (clarinet) on Friday and Zeena Parkins (electric harp) on Saturday, if I recall correctly.

Music at Duende is held in an upstairs loft with wood paneling. Sound does travel between the stage and the restaurant. In the case of the well amplified Nels Cline Singers, this wasn’t a problem. What the restaurant patrons thought, I don’t know, but there’s a good chance they barely noticed the music over the natural buzz of the place. It was really crowded.

I saw Wednesday night’s opening show, and it was good. Great vibe, with an audience psyched about not only the music but the venue. This isn’t the first music Duende has hosted (Patrick Cress’ Telepathy had been there the night before, according to the schedule) but the four-night residency had a Grand Opening feel.

The show started off with gentle Nels, playing “Lullabye for Ian,” but that eventually merged into a louder, electronics-laden zone, where the folks who’d come to see Nels shred madly got satisfied. Nels at one point drew up a sample of their playing that also included a drumbeat, and he looped it for a kind of auto-rock beat. They had a lot of fun with that.

Trevor Dunn on bass stayed mostly in the background, although he did get some nice melodic solos on “You Noticed” and “Blues, Too” — both jazzy songs, with Dunn soloing during quieter times. Scott Amendola on drums was in full rock mode for much of the set, pounding away happily. (I did hear one person complain he’d overdone it.)

As for the food, it’s pricey, but of course you’re paying for the experience, including snappy decor, unknown cooking ingredients from Spain, and a wine list of obscure bottles with random-adjective descriptions (not that music reviewing gets any less abstract). I stayed on the bodega side and ordered a small plate and some wine from the cashier; both were good, and so was the lemon ice-cream sandwich that I got on the way out. It was a treat. I’m looking forward to going back. 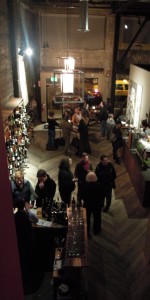