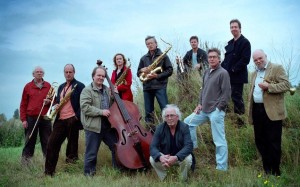 I will not make it to New York to see the Willem Breuker Kollektief play on Oct. 4. It was a legitimate possibility, but it won’t be happening.

I’m very grateful to have seen them once, though, on a pass through the Bay Area. The Kollektief has essentially been on tour for 35 years, with varying personnel, of course, and with the passing of Breuker himself, the group is making its final time around the map.

Understandably, the tour makes just a brief jog through North America, going no further west than Chicago. They’ll then return to a set of shows in Europe that culminates on New Year’s Eve with the third of three nights at BIMhuis, in the band’s native Amsterdam. It’s a fitting way to close this chapter. In fine optimistic form, the band is calling its show “Happy End,” but the final installment is titled “A Happy Start…!”

You can see the whole tour schedule on the Kollektief site.

The Kollektief were global ambassadors of the new Dutch swing, as Kevin Whitehead coined it, a music that blended the jazz tradition with classical music, avant-garde improvising, and a healthy dose of humor. At the show I saw, one improv stretch had four of the horns playing unaccompanied, doodling around, while the rest of the band feigned exasperation at how long this was going on.  The drummer got up and paced; Breuker pretended to be fuming at having lost control; two band members started playing tic-tac-toe on the sheet music. It was artsy and yet entertaining.

But the music was substantial, with solid composing, crack performances, and real emotional depth. It felt like the band members treated the music as a way of life and a way of living.

The band was a thing of greatness, and it’s fitting that they would celebrate their history one last time before saying goodbye. I’m sure Brooklyn’s Shapeshifter Lab will give them a good NYC sendoff (the final North America show is Oct. 6 in Pittsburgh, at Carnegie-Mellon.)