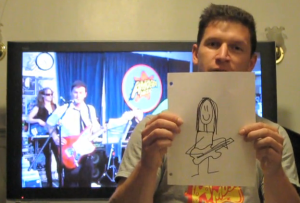 This is the same 10″ mentioned previously, when I’d stopped by his Amoeba Records in-store appearance. It would feature seven songs.

The Kickstarter project Moe has launched asks for a modest $3,000 to produce two colored versions of the 10″ along with corresponding CDs.

Rewards range from the obvious (vinyl and CDs) to a live concert of the band, at your beck and call within 75 miles of Oakland.

WordPress is “disappearing” my attempts to embed the Kickstarter video, so you’ll have to go over there yourself to see Moe’s depictions of the musicians on the album, including players of percussion, keyboards, oboe, and clarinet. As with the first Surplus 1980 record, Moe is taking advantage of the local music ecosystem to build something beyond your average rock band.