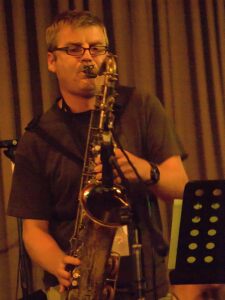 The group is set to perform this Thursday, Sept. 13 at Meridian Gallery (535 Powell St., San Francisco).

When you check out the group’s 2002 album on Bandcamp, you’ll hear what’s clearly an improvising ensemble, but one that operates within an overall structure. I’ve been curious about how the EMTPO operates, and about the fact that Bennett has revived the concept several years after its most recent performance.

So I e-mailed Aaron a few questions, which he’s graciously answered. The exchange is below. All italics are added by me, to emphasize the parts that are that cool.

Q: Does the group improvise on their own, or are they working from a framework you provide? What kind of framework?

“This enables me have an improvising ensemble where I can encourage a form of continuity within the piece and at the same time utilize the improvisation skills of the musician (and I have been lucky enough to have a great set of improvisers in the ensemble). For example, I may have the same rhythmic phrase passed between sets of musicians in different parts of the composition, as each musician is improvising at least one element of the material, in this case, the melody, there is both continuity and change each time the phrase is heard in the piece.

“Also, it was my intention to have the music have an element of stasis within a section along with a few elements of action. The idea was to mimic the “physical world” in a way.

“When you stand at a street corner observing the landscape you are in, or any lively landscape, there are a number of interesting elements which stay put and therefore fall to the background of your consciousness, and a number which draw in your attention and are in the forefront of your mind or focus. In these compositions, the freely improvising musician is the latter and the others are the former. But the interesting part, is that in either of these scenarios, my music, or the “physical world”, it is often the landscape, the parts that you are not actively focused on, which define the entire feeling and experience of the event and certainly effect in a big way what the active element is and means. And so I wanted to create an improvised music gave the listener a trip through a variety of these landscapes, like walking through city streets and observing what is going on around you.”

Q: What made you decide to bring the idea back? What’s changed about the concept since 2000?

AB: “What first made me decide to bring it back was a gig at CNMAT, where I was given carte blanche to do what I wished, and I thought that would be a perfect setting for having a group do these types of compositions. I ended up with an instrumentation that was roughly half brass/woodwinds and half strings. I really enjoyed the mix of timbres that brought out. Nothing has changed about the concept beyond that.

“From that show an opportunity to play at the Berkeley Arts Festival materialized, and then a few others. Also Joe Lasqo, a fantastic pianist and composer living in San Francisco, who is now in the group, has been very encouraging and inspiring. And lastly, (and this is also what kept me pursuing shows for the group back in 2000), is the amazing group of musicians I keep getting lucky enough to have play in the ensemble.”

Q: Any other shows planned?

AB: “We currently have no other shows planned. But hoping to have some more soon!”

(Thanks to Aaron Bennett for his time. The EMPTO show is part of Next Now, the Meridian Gallery series highlighting improvised music. Also on the bill for Thursday are Mika Pontecorvo’s Cartoon Justice (new emergent composition from live sonic architecture) and Key West (free jazz for sax, drums, and alternative instruments).)