In 2000, I was assigned to write a Hedy Lamarr obituary for my day job at a tech publication. High-res images were harder to find on the Web back then, so to find one suitable for print — because we did publish on ink-and-paper back then — took about half an hour of looking through Hedy Lamarr photos. It’s not the worst afternoon I ever spent at work.

Lamarr’s relevance to electronics was her patent for a frequency-hopping system that is now the basis for cellphone communications. The patent is legit; Lamarr had more engineering aptitude than people gave her credit for, and her idea, intended as an unjammable torpedo guidance system, sprang from a concrete knowledge of munitions technology. I’m reading a book about it all now: Hedy’s Folly by Richard Rhodes.

Her partner in the invention was George Antheil, which is how all this ties back to music. It’s through researching Lamarr’s obituary that I came across Antheil, the self-professed Bad Boy of Music — and composer of “Ballet Mécanique,” a piece for (among other things) xylophones, an air siren, three airplane propellers, and 16 synchronized player pianos.

Antheil had overestimated the pianos’ ability to synchronize and to play at volume, so while he did perform the Ballet — to a literal riot of a reception, so the story goes — it was with eight or ten live pianists following his lead.  The Ballet didn’t get a full 16-piano performance until Paul Lehrman developed a MIDI-driven version in the late 1990s. It’s been performed many times, including once in San Francisco with Michael Tilson Thomas conducting.

I attended that concert, and I had a blast. Screens overhead showed the keys of four of the pianos, one of which stopped working early in the piece. Lehrman — a colorful guy who was in a fantastic mood after the performance — got informed of the errant piano during his post-event Q&A and was full of mock indignation. “OK, fine! So you heard only fifteen player pianos! Come back tomorrow, we’ll do it over again!” 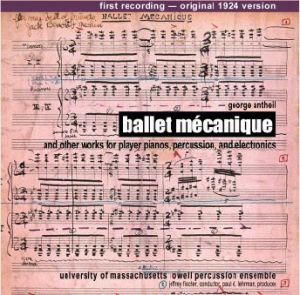 “Ballet Mécanique” is pounding from the get-go, with the player pianos hammering away at simultaneous chords that come out almost like a blur. The xylophones create that big-city-bustle feeling that xylophones do, and various alarm bells and other crashing sounds create the image of something relentless and busy. It’s only 1 minute into the 30-minute piece that the air siren shows up.

It’s not just noise. There are definite melodies and episodes, and recognizable repetition and development — you don’t really feel assaulted as much as exhilarated. “Cold as an army operates” is how Antheil described the idea in one letter quoted by Rhodes. Antheil was striving for the image of a machine-dominated landscape, and for the standards of 1920s ears, he achieved his goal — but I still find the music more pulse-pounding than mechanistic.

Late in piece, things get quiet. Long silences abound, stopped by a sudden blare or buzz. Tilson Thomas, listening to a click track, continued conducting through the silences — which looked awfully pretentious but admittedly told the audience that the performance hadn’t simply broken down.

My point behind all this was that I’ve started to explore Antheil’s other work, but that’ll be saved for another blog entry. It’s hard to start talking about “Ballet Mécanique” without rambling. For a LOT more information, spend some time at antheil.org.

While several “Ballet Mécanique” recordings are available, I have to point out the one produced by Lehrman himself, released by the Electronic Music Foundation. You can click the CD cover to get to their site, but I’m not sure if they’re still shipping CDs. You can also get a DVD of a Lehrman-produced documentary about Antheil, Bad Boy Made Good, where one of the extras is a video of the Ballet’s first live performance.