I filled in for a couple of hours Tuesday night on KZSU. You’ll find the playlist here.

I’d decided to alternate sets of experimental music (we have lots of drone/ambient in rotation at any given time) and classical. Found a couple of interesting things looking through the library. 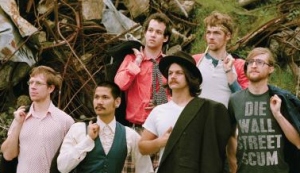 The big discovery: The San Francisco rock band Battlehooch. A group I certainly didn’t expect to be adding to my classical/experimental show.

I wanted to pick a show to give away tickets to, and the info sheet for this one indicated that Battlehooch might be something weirder than ordinary rock. OK, then — I randomly grabbed the Oof Owf EP, spun the track “Boog Woogily,” and — yowza. Fast cartoony rock with saxes beating out the bassline and wacky percussion. Signs of serious musicianship behind a clown-punk exterior. They’re one of those bands that I can’t believe I’ve missed for all these years.

I couldn’t not play this stuff after falling in love with it, so I used a few noisy tracks to lead up to a Battlehooch ticket giveaway. (Credit one assist to Liz Allbee, whose nifty little track “Drill Sergeant, Drunken Revolt” ends with the same kind of vocal hoots that “Boog Woogily” starts with — nice transition there.)

Battlehooch plays at Slim’s on Saturday, Jan. 7. I just might go. Hear these guys on Soundcloud.

In my show, Battlehooch led to an art-rock phase with the newest from Cheer-Accident (highly poppy stuff, but still progged out and a little weird, just how the band’s fans like it), and old stuff from 5UUs (a mellower track with bassoon-sounding synths, comparatively stripped-down)

I got back to classical music with a performance by solo saxophone and tape from Susan Fancher. Her album In Two Worlds, on Innova, shows off a lot of jazzy dexterity in a spare, modern-classical environment.

Having said all that, I did manage to get some classical music spun, and that led to another nice discovery.

In rotation, we’ve got In Memoriam, a collection of performances by Emanuel Vardi, considered a modern master of the viola. It was released by the Cembal d’Amour label last year after Vardi’s January 2011 death. I’d never heard of Vardi, I have to admit, but he was well respected — and he’d been living a second career as a painter, after a 1993 shoulder injury ended his music-playing career. It’s a bittersweet story. He and his wife both painted, and you can some of their pieces at vardiart.com. (That’s one of them, to the left of the next paragraph.)

Anyway. We’ve got one overenthusiastic DJ who’s been stuffing the rotation with Brahms, Bach, Chopin kinds of classical music — stuff that’s damn near impossible to fit into an eclectic show — but I was pleasantly surprised to discover the Vardi CD focuses on 20th century pieces. I played Michael Colgrass‘ “Variations for Four Drums and Viola,” recorded by Vardi and Colgrass in 1959; it’s got a stern strength despite the spare duet setting.

I followed that up with a solo viola sonata by Paul Hindemith, off the Lawrence Power collection of Everything Hindemith Ever Wrote For Viola (not the actual title) on Hyperion. 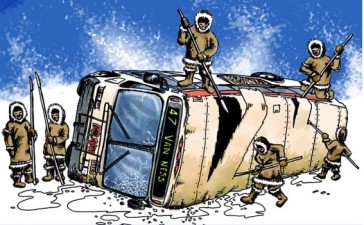 From a poster for the Jan. 7 Battlehooch show at Slim’s. Click to go to The Bay Bridged, from whence I copied this.