The Christmas/New Year’s zone can be like a post-apocalyptic wasteland for music shows, but there are always a few dedicated presenters who damn the torpedoes and put on shows anyway. They’d love to see you, I’m sure.

Daniel Popsicle @ Berkeley Arts Festival (2133 University Ave., Berkeley), Thur. Dec. 29, 7:00 p.m.
….. I’ve seen Dan Plonsey a few times in the past couple of years, but I haven’t seen a Daniel Popsicle show. The band was more like a mini concert orchestra a few years ago, performing Plonsey’s long, episodic compositions that were like Braxton’s Ghost Trance Music made less strident and more melodic. I don’t know what Plonsey’s “Music of El Cerrito” group has in store this time, but they’ll apparently include some music from New Monsters, the sunny avant-jazz group he and bassist Steve Horowitz have created.

Charm and Strange/Hare and Arrow @ Luggage Store Gallery (1006 Market St., San Francisco), Thur. Dec. 29, 8:00 p.m.
….. Two acts presenting fairly calm electronics sounds/noise. Charm & Strange is the duo of Julia Mazawa and Sharkiface; you can sample some of Mazawa’s turntablist work on her blog, and videos of Charm & Strange performances can be had on YouTube. Hare and Arrow is the duo of instrument builder Sung Kim (on the left in that picture) and David Dupuis; they’ve got a few samples of work up on Soundcloud, and yeah, they’re also viewable on video. 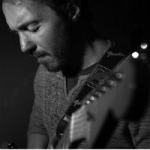 ….. The monthly jazz series continues at this Mission District bar. The lineup, cut-and-pasted from Bayimproviser.com: