The New York Times, among other outlets, is reporting today that Sam Rivers has died at the age of 88.

I’ve missed my chances to see a lot of the jazz masters before they made their passage. Thankfully, Rivers is not one of them.

I saw him play at Bruno’s in San Francisco, maybe 10 years ago? Maybe a little more? He performed with his trio: Doug Mathews on bass and Anthony Cole on drums, but all three of them shifted on instruments, with Cole or Rivers taking to the piano, or Mathews picking up a clarinet.

The instrument shifts were fun, but Rivers himself was impressive, too. Aged 80 or thereabouts, he still blew his sax fiercely, with energy and youth still in his lungs. I’m telling you: Whatever music you’re into, you have to take the time to see the performers live. You’ll regret it if you don’t. 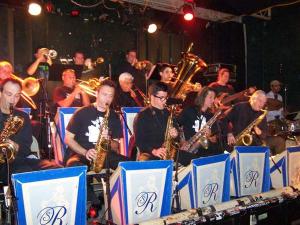 This show happened sometime after the trio had released the album Firestorm, IIRC. Rivers’ records from there would concentrate on his RivBea Orchestra, the big band he’d convened in his home state of Florida. This was tightly swinging, hard-punching stuff that easily won the critics’ hearts and got airplay on numerous college radio stations like ours.

More than just a great player, Rivers helped launch New York’s loft-jazz scene in the ’70s. You can read on his rivbea.com site about Studio RivBea nurturing a generation of great musicians. For a more complete obit, you can read Nate Chinen’s article for the Times (linked above), or check out Peter Hum’s blog for the Ottawa Citizen. It’s laden with video references.

Me, I’ll probably take a moment to reflect and maybe spin Bobby Hutcherson’s Dialogue. Sam Rivers is on there, and it’s been a while since I’ve listened to the title track and its open flow of ideas. Maybe the recent RivBea Orchestra stuff after that — it’s so buoyant and sunny, a great way to remember Sam.

If you happen to be in Orange County, Florida, local cable-access will be showing video of a 2008 Sam Rivers performance a few times in the coming week.