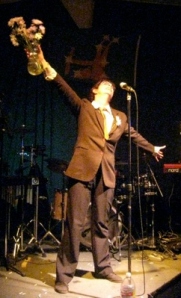 I forgot to bring my camera to the ReCardiacs Fly show at The Starry Plough last Friday. Dang.

Luckily, Michael Zelner has posted some photos. Hooray!  There was video filmed as well, so hopefully some of that will get posted eventually.

It was a great time, with the band tightly charging through some fast, complex Cardiacs songs. Highlights included “R.E.S.” — which tops a lot of Cardiacs fans’ lists, I think — and “Tarred and Feathered,” which I don’t think they played at their first concert.  (Links go, respectively, to videos of the previous concert and the original Cardiacs.)

Polly Moller hammed it up on stage, playing the role of quirky, aggressive Tim Smith. Moe! Staiano did a sharp job on drums; it occurred to me that I hadn’t seen him play on a drum kit before, not in a rock setting, anyway.

Lots of people were asking if they’d be doing more shows — which I think they’d like to do, but of course, they’ve got other musical projects to concentrate on as well. That includes Reconnaissance Fly, the band that’s the core of ReCardiacs Fly.

A couple of people said they’d be interested if the band were to make a CD. But I think the band would prefer that you go to iTunes and just buy the original Cardiacs albums. It’s a way to send a few extra dimes to Tim Smith, Cardiacs’ leader.

Apologies to Wiener Kids and Dominique Leone, who’d played earlier in the evening and probably did some Cardiacs covering of their own.

UPDATE 12/11: Videos from the show are up. Find them on ReCardiacs Fly’s YouTube channel. “A Wooden Fish on Wheels” came out really well, but I can’t help embedding “R.E.S.” yet again. They’ve gotten quite good at that one.

One thought on “Cardiacs Fly Again”