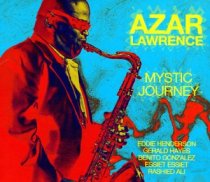 Azar Lawrence is doing a live recording for his next album on Dec. 13-14 at the Jazz Standard in New York. He’s launched a Kickstarter fund for the costs of organizing the gig and producing the recording… although time is running out and he’s well short of the ambitious goal.

Does the name not ring a bell? Lawrence is a saxophonist based in Southern California who’s very much in the late-period-Coltrane mold. He was on Miles’ Dark Magus and worked with Earth, Wind and Fire — but I know him through his 1970s work with McCoy Tyner, specifically his towering sax on Tyner’s double album, Atlantis. It’s an album filled with that stormy-sea piano that was actually what first caught my ear about the 1964-and-beyond Coltrane albums, more so than Coltrane himself.

Lawrence has continued along similar lines. His most recent album, Mystic Journey, has a lot of that Coltrane-ish sound, particularly in the title track and “Summer Solstice,” both written by Lawrence. Pianist Benito Gonzalez’s channeling of Tyner is an appropriately big part of the sound. Other tracks take a rather straight-jazz approach, including the ballad “Say It Over Again” and Rashied Ali’s tropical tune, “Adrees.”

It doesn’t necessarily cut new ground, but I find I’m OK with that. That might sound odd considering I devote this blog’s energy to edgier music, the Steve Coleman and Tim Berne vectors of jazz. 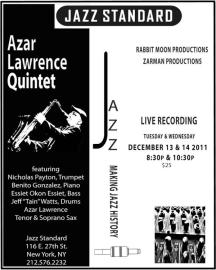 But it’s what I expected when I picked up the album, and maybe I’m also just glad to learn that Lawrence is alive and well.

There’s another thing: Just before going to New York recently, I’d read Ethan Iverson’s Do the Math blog, specifically his thoughts on Hank Jones and Mulgrew Miller. The lesson I took from that is that a musician doesn’t have to do “interview music” to be saying something worth hearing.  And then, at Downtown Music Gallery, I happened to spy Mystic Journey, and I’d always wondered if Azar Lawrence had continued his career — and the sum of it all was one very pleasant CD listening where I could revel in the lessons Lawrence was passing down from the Coltrane/Tyner era.

Maybe I’m also just glad that some artists are keeping that period alive. So much jazz energy is spent on preserving ragtime or (modernized) swing, or cocktail jazz. Having some spokespeople for the more freedom-seeking forms of “straight” jazz isn’t so bad a thing. And when the album shifts into gently nostalgic bebop mode for “Say It Over Again,” it’s actually quite nice.

Lawrence might not be saying anything wholly new, but I’m glad to hear him show off that he can say it.