Before the World Series rose to an all-consuming fever pitch, stealing time from things like this blog, I went to the release party for the new Grex CD, Second Marriage.

This was in downtown Oakland very near to Jack London Square, at the Swarm Gallery — my first trip there.  It’s a small art house that doubles as an artists’ space; offices in the back appear to be rented out as mini-studios.  The show was held in the spacious common area ringed by the offices. Not a bad spot for a show, because they’ve got the space and it’s mostly comfortable, if a little warm.

Swarm is close to some seedy neighborhoods (quite a few provocatively dressed women walking around, anyway) but there weren’t any signs of trouble around us. I was more thrown by the sight of a Bed Bath & Beyond sitting right around where the Swarm’s address was supposed to be.

Grex’s sound fuses classical piano, pop melody, and loud spasms of electric guitar — big, buzzy electric guitar. Karl Evangelista and Rei Scampavia, who really are getting married, performed as a duo half the time, and with drums (Tom Scandura?) or sax (Cory Wright) as guests on the other songs. A friend of theirs added video backdrop. 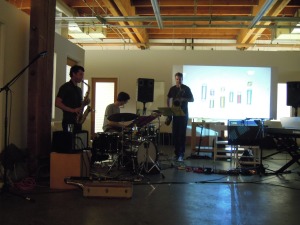 Before Grex, I finally got to see Wiener Kids. They’re as entertaining as I’d hoped — maybe not as laugh-out-loud funny as my CD review made them sound, but certainly a nice blend of cerebral jazz and smart-aleck tactics. “Here’s a Fun Fact,” off the new album What a Mess, was a highlight. It opens with intricate percussion, each band member hitting one instrument to produce overall patterns. (They got lost once or twice during this part; it didn’t sound easy.) Whistles and bird calls complete the intro before the chugging, R&B-steeped sax parts get started. Glenn also brought out the accordion for “Ballad of the Wee Dogs.”

The evening started with Alee Karim’s Science Fiction, a pop band that deals in big, flowery chords. Pretty music played at very high volumes. The band’s still new — they did flub a couple of songs — but they’d be worth seeing again, and not just because a couple of them were outside during a break having an earnest discussion about the awesomeness of Rush.