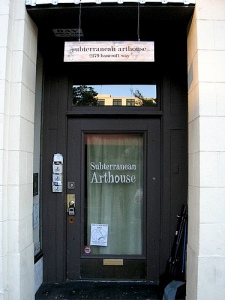 Karl Evangelista is starting the Open Music Series tonight (Aug. 3) at the Subterranean Arthouse in Berkeley.

It will hopefully be a monthly series of shows, providing another outlet in the wake of 21 Grand moving out and the Ivy Room closing its doors to the free-jazz/improv crowd (although I’m still glad they hosted the music for a while).

I’ve got high hopes for the series. The Arthouse has already been hosting some creative music, and it’s conveniently nestled in downtown Berkeley.

Here’s the jazz-minded lineup for the first night:

Like 21 Grand, the Arthouse is a nonprofit with its heart and soul in the arts, and that’s important. Here’s how Karl puts it:

“The reality of many of the regular bookings in the Berkeley/Oakland area is that musicians have to compete with the background noise of any given venue — bar noise, miscellaneous patrons that aren’t really around around for the music, and (in the worst cases) the maliciousness of the hired help. Since the Arthouse is essentially a gallery space run by a nonprofit, it let’s the music do its thing; there’s maximum creative freedom and the general quietude of the environment allows us to book more subtle, dynamic music.”

That last point is important. From my viewpoint as a spectator, it can be fun seeing experimental music in a bar or restaurant setting (a little bistro called Radio Valencia was tops on my list), but it’s not the right setting for quiet music — that is, music that makes active use of silences. Even the Outsound New Music Summit, comfortably housed in the Community Music Center theater, had to contend with the punk rock house concert next door. Luckily, they overlapped by only a few minutes, but it was still distracting.

There’s a lot of work involved in putting on a series, and I’ve got the deepest appreciation for the musicians who take that job. The Arthouse is a comfortable little place. Here’s hoping they can stick around for a while and provide a haven for creative music.