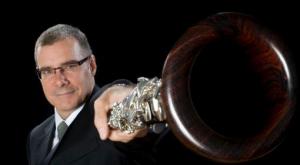 Clarinetist François Houle will be the featured player at this year’s Sperryfest, the series of concerts in honor of the late bassist Matthew Sperry. Concerts run July 13 to 15.

Part of Vancouver’s terrific jazz community, Houle has an output that covers a nice swath of experimental musics. He’s done some nice free-jazz work for the Songlines label, including a 1999 album called In the Vernacular that I remember fondly. He’s also recorded on Spool, output that I’m less familiar with but that includes some of the key Vancouver names of the last 10 to 15 years, including Peggy Lee (cello) and Dylan van der Schyf (drums).

Houle brings a fresh energy to new classical music as well. I’m thinking particularly of Double Entendre, an album of new-music pieces for multiple overdubbed clarinets and pre-recorded electronics (a.k.a. tape music). More recently, he recorded the piece, “Flirt,” a duet with accordianist Jelena Milojevic composed by Doug Schmidt. This page on his web site sets the stage and links to an MP3 recording of the upbeat, pulsing piece.

The SperryFest schedule runs as follows:

Wed. July 13, 8:00 p.m. — Houle solo, at a special dinner concert for 20 put on by In the Mood for Food. This one’s going to be hard to get into, because some spots are reserved for Sperry’s family and friends.

Posts related to previous SperryFests (including background about why Matthew remains an inspiration, eight years on):