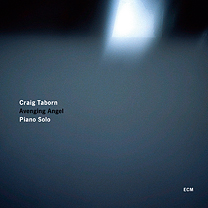 Craig Taborn takes a studious approach on his first solo piano album, taking advantage of the chiming acoustics of an auditorium in Lugano, Switzerland. It’s a seeking process. You can understand what French critic Vincent Bessières means when he says (quoted on ECM’s site) that Taborn takes an approach “where improvisation blends into real-time composing.”

For example, “The Broad Day King” opens with the right hand playing pedal tones, individual notes that Taborn lets ring slowly while the left hand explores matching chords. Late in the album, “Forgetful” hands us a lovely jazz ballad, starting in tentative, primordial form, then blossoming beautifully. The intensity peaks early than halfway through the eight-minute piece, but the rest rides a lovely, gentle arc that’s just as rewarding.

It’s very hard not to think about Keith Jarrett, because the shallow similarities are there: solo piano, improvised on the spot, recorded in Europe, ECM, minimalist album cover …

About the cover. Yes, the hushed, soft image is partly just ECM being ECM, but this kind of sparsity seems apt for an album of solo improvisation. You see it on some Jarrett albums, or Henry Grimes’ Solo, for instance. It represents a blank canvas, giving the listener visual space to explore. Maybe that’s why Avenging Angel strikes me as participatory, as if you’re welcomed inside Taborn’s head has he explores, reaching outward to find the music waiting to be produced from this exact moment of time, place, and presence.

Taborn’s explorations are more varied and intricate than Jarrett’s. There’s a lot going on in a Jarrett improvisation, but he tends towards songlike forms, building harmonies around one tonal center. Jarrett can be dazzling, and there’s no denying the grandeur of his work, but there’s a formal sheen to it.

Taborn’s approach reflects the more “outside” tendencies of his jazz career. He does stick to his ideas on each piece, rather than going schizophrenic, but he wrests out the possibilities with more finesse and adventure than Jarrett. And when Taborn does lock into an idea and ride it out, he certainly shows off some dazzling technique of his own.

At the same time, Avenging Angel is very much a jazz album, especially when it comes to the faster tracks. You get a patient jazz stroll on “Neverland,” two hands in dialogue, wandering about tonal centers. There’s also “Gift Horse/Over the Water,” which uses the left hand in a more traditionally jazzy rhythm but also sneaks in some quick unison phrases and one nifty ostinato, over which Taborn splashes some strident chords, possibly the album’s most Jarrett-like moment. It’s spirited jazz that would make a good first listen if you’re trying to win new converts for Taborn.