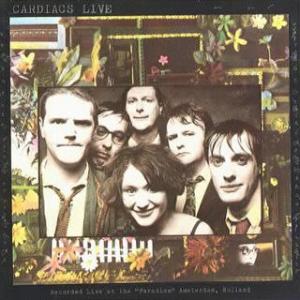 I recently talked with Dominique Leone about the upcoming Cardiacs benefit being held at Cafe Du Nord (San Francisco) on Sunday, May 8, from 6:00 p.m. to about 10:00 p.m.  Talked to him on KZSU radio, in fact, right over the airwaves.

Wouldn’t you think I’d put some of that interview onto this blog?

Ha! You’d be wrong! Until now, that is, when a combination of having-enough-time and finally-thinking-about-it has brought you this transcript. I’ll add the edited-down audio later if I get the chance.

If you still don’t know this band — they’re crazed prog/punk, sometimes loopy, sometimes full of big evil guitars, always rocking and mind-numbingly complex. You can sample their output on YouTube and on iTunes, and you can skip straight to the Zappa part of the interview for Leone’s descriptions of the music.

And you should come check out the show, which includes Leone, Moe Staiano, and Amy X. Neuburg. It’s a good cause.

How would you describe Cardiacs? You’re walking up to a friend, and they’ve never heard of this band — who are these guys?

DL: Cardiacs are an English band. They’re originally kind of a post-punky band that started in the late ’70s, although even then they were kind of out there and [had], I don’t know, a little of a circus atmosphere to a lot of their songs. But the energy and the speed and just the visceral activity of a punk band — a good punk band, too. These guys are not holding anything back.

When I first heard them, I was kind of amazed. I actually first heard one of their later albums — that was the first thing I heard by them. They’re one of these bands that — they just kind of turned it up with each record, and by the end, they were really an extremely amazing over-the-top kind of band, in a lot of different respects.

Yeah, and they have videos on YouTube, especially when they do the older stuff — they had a whole stage act going, makeup and everything. Pretty amazing. How did you find out about this band? Because their stuff is hard to find in the U.S.

DL: It’s really hard to find. I actually had trouble finding it when I wanted it. I first heard them from a friend who happened to have some of the old LPs. He thought I might like it, he played it for me, and I was floored.

But when I went out in the world and tried to find it … no record stores had them — this was back in the days when there were record stores, five years ago — so I went online and tried to look for them. There’s not really any place online where you can get them. So, I eventually found my way to the actual distributor’s web site that has a whole catalog, thousands of records, 10 of which are Cardiacs records. I just bought it directly from them. And now, that’s not even available. I don’t think that any Cardiacs records are in print — not because there’s not demand for them, but because Tim Smith, unfortunately, has health problems and can’t run his own business. He can’t take the time and talk to the people that he needs to talk to to get your records out into the world. He’s just kind of bedridden. That’s definitely a big reason why we’re doing this concert.

[As noted above, all Cardiacs records are now available on iTunes.]

Why don’t we talk a little bit about Tim Smith’s condition.

DL: Well, first of all, we want to help him take care of himself. Tim Smith had a stroke [following a June 2008 heart attack] and ever since then, he can’t perform. He can’t sing, he can’t finish the record that — at least a part of the instrumental track is already done. He can’t put his vocals on top of that. So all we’re doing with this benefit is: Try to raise a little money, try to help him take care of himself, and hopefully help him get back to a position where he can finish a Cardiacs record or at least help make his catalog available, help live out the rest of his life in a manner that’s not bedridden — that’s healthy, [where he] can enjoy what he’s created.

Now, this is obviously not “normal” music. Which is good! — “not-normal” in a good way…

DL: Speak for yourself!

… But in putting together a benefit, finding people and bands to play this music — I’m imagining it was pretty difficult.

DL: It’s tough finding people who A) know the tunes at all or B) can play the tunes. We were just talking earlier today — I schedule more rehearsals for this concert than I would normally schedule for a regular show with my band. And we’re only playing, like, two songs. It’s gonna take that much focus and shedding to get them down.

I’m playing a song called “Dirty Boy,” which is kind of — I mean, I would say it’s the greatest Cardiacs song, or one of the greatest. It’s an epic tune, but unfortunately, with a chord change every measure. For about eight minutes.

How many bands are involved here?

DL: It’s changing every day, but at the moment, I believe there are seven bands involved…? I actually need to consult with Moe, because Moe is the one sending me the band updates. But I know, myself, of seven.

That’s pretty impressive, just finding that many people who already know the band and/or are dedicated enough to know the songs.

A lot of comparisons come up when you read old reviews of this band. They talk a lot about Frank Zappa, a lot about Captain Beefheart. Do you find those valid? Do you find that an accurate way to describe the band?

DL: Eh, not so much. I mean, Frank Zappa — he’s one of these guys that, in some way, you can see his music applying to Cardiacs because, if nothing else, it’s hard to play. And the tunes themselves are certainly unorthodox chord changes, unorthodox melodies.

But there’s not a lot of soloing. It’s really more of a band thing. It’s all about the actual composition as opposed to — when I think of Frank Zappa, I think of composition, but I also think of 20-minute-long guitar solos, and that doesn’t really happen in Cardiacs. More apt would be something like Devo, early Devo-ish kind of stuff, where it’s definitely coming out of post-punk and new wave, but also deranged — it’s like a deranged art band. That’s more similar to what I’d say Cardiacs is coming from.

Now, their last stuff — it’s — I don’t even know how to describe it. It’s kind of like if Queen had been a punk band. [My chosen example, below, isn’t all that punky, but there’s some Queen-ness.]

Everything’s overdriven, everything’s these huge epic productions, and just — everything’s turned up into the red. It reminds me a little bit of a Zach Hill kind of energy, except that you have these four-part harmonies and these circusy melodies. It’s definitely music that’s hard to play, in some cases hard to listen to, but it’s awesome, and it’s just this huge high. That’s what Cardiacs is. This huge glowing high. That’s what’s hard to pull of, and that’s why we’re going to try to do it.

I guess we should point out, too — the band has two distinct phases. They had saxophone and xylophone early on, for a very circusy sound.

DL: Yeah, and they still have, on their later records, some saxophone stuff. But I think their earlier records were a little bit more loopy as far as the marimba playing and the jerkiness of things. A lot of that’s down to when it was happening. There were a lot of herky-jerky-sounding bands in 1978.

Yeah, I guess you could call it two phases, because by the ’90s, everything had certainly become a little bit more — I don’t even know how to describe it. Like this sun mushroom. Jagged-edge, post-punk, really wiry kind of music.

(For more info: Cardiacs.org and Cardiacs.com. And click the photo below for a nice 2007 review by The Dreaded Press.) 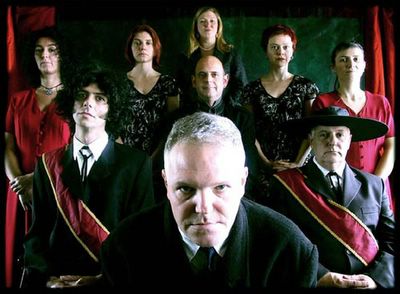