After a period of relative silence in terms of CD releases, Tim Berne is busting loose. From the e-mail newsletter for his Screwgun Records label, here’s what he says is on the way:

* Insomnia on the Clean Feed label (already out, but it’s a good place to start).

* Old and Unwise, on Clean Feed — duo with bassist Bruno Chevillon. Arriving in May. 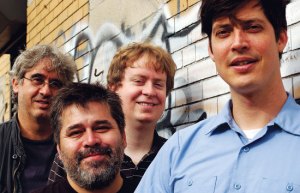 * On ECM, a CD from his band Los Totopos, which includes Berne (sax), Oscar Noriega (other sax), Matt Mitchell (keyboards), and Ches Smith (drums). The band has been performing regularly for a couple of years now, it seems, and should be in top form for their upcoming Australian tour.  The Screwgun home page offers some sound clips and a taste of Totopos on video; I’ve embedded the same video below. UPDATE: I should add that the CD is unmixed and not likely to appear this year. That’s what Berne indicates in his e-mail; I’m adding this because I think some folks who’ve seen that e-mail are stumbling on this blog hoping for more info.

* Sons of Champignon, a band originally called The BBC, apparently has a CD arriving this year. It’s the trio of Berne (sax), Nels Cline (guitar), and Jim Black (drums). They, too, are findable on YouTube.