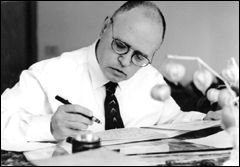 On Thursday Dec. 2, if you’re taking advantage of the SF Museum of Modern Art evening hours and half-price tix, consider lending an ear to sfSound Group. They’ll be doing a concert along with Italian composer Sylvano Bussotti.

Bussotti himself will play a piano accompaniment to his silent film, Rara, described as “filmed portraits of the Italian avant-garde” from the early ’60s. It’s being shown, as a restored print, in conjunction with the exhibit, Exposed: Voyerism, Surveillance, and the Camera Since 1870.

Then, as the exhibits close at around 9:00 p.m., you’ll be able to stick around for an sfSound performance of multiple Bussotti works, with the composer participating. The program includes very recent works as well as pieces from the ’60s.  Details here.

It’s all free with half-price museum admission ($9 for most of us), but the museum’s promo blurbs warn that seating is limited.

Bussotti is one of those composers famous for graphical scores — wild, babbling ones, in his case. Graphical scores are a tricky item, because it’s often up to the performer how to interpret the abstract shapes and drawings involved. In Bussotti’s case, his pictures use standard musical notation as a foundation, twisting the staves and notes into Alice in Wonderland underbrush.  He seems to have multiple pieces called “Rara,” and one of them piles musical notes into the shapes of the letters “R” and “A.”

On one hand, a graphical score invites more of the performer’s personality into the piece, and it emphasizes the uniqueness of the moment. Every performance is a star that shines once, then vanishes. On the other hand, you can’t help but wonder if the composer is playing a prank or, worse, just phoning it in, scribbling stuff down and leaving it up to the musicians to make something of it. Maybe it’s a little of both; there’s certainly something of a serious prankster in John Cage’s work, right?

Some samples of Bussotti’s music are up on YouTube, including the austere sounds of the “Fogli d’Album” suite (which starts here) and some rustling inside-the-piano work on “Noveletta,” below.

UPDATE: For a deeper look at Bussotti’s music, his film, and how this program all came about, check out San Francisco Classical Voice.