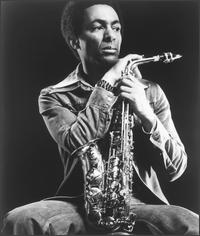 You’re about to hear a lot more about Bunky Green.

In a genre (free jazz) where undiscovered greats are the norm, Green has been an even newer discovery than usual, for me at least.  He’s 74, so he’s no tenderfoot.  Yet, he escaped my radar until early this year, when a Do the Math blog post by Ethan Iverson all but dared listeners like me to seek out Bunky Green.

I’ll repeat the quote: “Steve Coleman wouldn’t exist without him.” *

Later this year, Green is going to get some serious publicity, following an album he’s releasing with Rudresh Mahanthappa on the Pi Recordings label. Mahanthappa and Pi are darlings of the college radio and NPR sets. Their stuff doesn’t exactly make the background music playlist at Target, but it gets heard and gets distributed. It gets found.

I can understand why some mainstream audiences might not like Green. He sets up a club-jazz backdrop: airy piano chords, richly grooving bass — traditionally progressive stuff — and then blasts diagonally across it all with some ferocious soloing. It’s quiet-night-out music with an asterisk. A chill-out lounge with labyrinth wallpaper.

Green’s solos are a delight. He’s lightning fast and deadly accurate, with a pillowy, breathy sound articulating each note in every impossible run — a masterful, light touch amid the bluster.  Not everything dimension-jumps into futuristic, Steve Coleman territory. Green plays by the regular rules when it suits him, and it still sounds like him.

I managed to learn a little bit about Green by thumbing through the KZSU vinyl library. He’s not an avant-gardist per se; he’s more an adventurous, hard-thinking straight-jazzster.  His album Testifyin’ Time, from 1965, is quite straight and swingy.

Places We’ve Never Been, from 1979, has more of the tilts, angles, and surprises I’d expected.  I remember the opening track, “East and West,” being a treat. But the album also has “April Green,” a mellow flight in that ’70s kind of chill vibe that I just can’t take.

Overall: Thumbs up on Bunky Green, as a musician and as a discovery. Can’t wait for that CD. Meanwhile, I’ve also listened to his 2008 Salzau Quartet recording on Traumton, which deserves a separate blog entry.

(* The exact Do the Math entry isn’t available as of right now; Iverson’s done some housecleaning in moving the blog to a new home.)