Bassist Michael Formanek will have a CD out in the fall on ECM, his first group outing as a leader in more than a decade. That’s cool.

Formanek is a big, likable guy, someone who seems to really be having fun performing.  His music is great, but his personality makes you want to root for him, in a sense.  I first encountered him as part of Tim Berne‘s Bloodcount, and shortly afterwards got a chance to see him live, on a rare west coast tour with Berne.

By happenstance, I’d recently found his first album, Wide Open Spaces (Enja, 1990) on cassette (Enja’s non-current records were already starting to be hard to find in stores).  After the show, I got Formanek to sign the card — he got a good laugh out of that, and the new-agey photo Enja used.

It’s not that Formanek hasn’t been playing.  He’s worked with saxophonist Julian Arguelles‘ trio (Tom Rainey on drums) circa 2004 and touring together as late as 2009; with Rainey, Baikida Carroll, and Tim Berne in Faux Faux, 2006; on Harold Danko albums for Steeplechase throughout the ’00s.  But he hasn’t done an album as a leader lately.

It’s probably because he’s been busy. I got to talk to him in 2008, after he’d performed with the reunited Bloodcount in Philadelphia.  He’d moved on to Baltimore and a teaching job, and was raising a kid or two, from the sound of it.

(It was a foolhardy yet worthwhile trip on my part; I wrote it up here.)

Here’s what I know of Formanek’s solo output:

Wide Open Spaces is the most mainstream of his albums, with Wayne Krantz adding plenty of lightly jazzrock guitar and Mark Feldman doing some soaring violin.  (And, on sax? Greg Osby! Quite the band.) The title track is downright pleasant and homey. but tracks like “Slothdancing” and “Yahoo Justice” show some twisty composing that was closer to what I’d expected.

I actually like the mellow, mainstream atmosphere here.  There’s a sheen to the overall sound, sure, but sometimes “nice” music is nice.

Extended Animation (Enja, 1992) is more Berne-like, partly because Berne is on it. The highlight track for me here is “Between the Lines,” which winds its way from an open improvisation down to a head-bobbing composed conclusion. 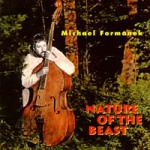 On Nature of the Beast (Enja, 1997), the violin is gone, its airiness replaced with an earthly cutting of four horns and clarinet.  (It’sw Dave Douglas, Steve Swell, Berne, Tony Malaby, and Chris Speed. Again, quite a band.)  “Grand Bizarre” is a catchy track that keeps returning to a pitter-patter trumpet theme with a World-music fringe; hearing it on my own mix tapes, I would occasionally mistake it for a Masada tune.

I don’t actually own Low Profile (Enja, 1994), but I’ve heard parts of it, courtesy of the KZSU library. Another multihorn band. At a glance, it doesn’t grab me the way the others do.

Formanek has co-led plenty of other work — the Relativity trio with Marty Ehrlich and Peter Erskine comes to mind. I prefer the Enja albums, though. They’re all out of print, so the ECM album is going to be a welcome addition.

What to expect? Well, ECM is famous for putting that spacious, crystalline quilt over everything, so I’m expecting something that feels mellow and gets deceptively adventurous. Not expecting the electronic fireworks of David Torn’s Prezens— which also features Berne and, come to think of it, kept an edge even under ECM’s watch. Hoping for some nice composing, anyway.

As for the title of this entry — it comes from Formanek’s solo bass album, Am I Bothering You? (Screwgun), which is notable for being based on compositions rather than just improvising. Nice stuff, and after it’s release, Formanek’s Web site had an intro reading, “Mr. Bother loves to play the bass!”