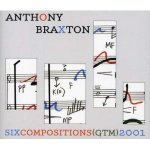 Man, does that album bring back some fun radio memories.

I love owning this 4-CD album, still available on Rastascan. I revel in its bigness, even though the Firehouse 12 label has since outdone it. I never liked those double-wide jewel cases that record labels used in the early days of CD formats — but in this case, it’s awesome, just sitting there on the shelf next to skinny, wimpy cases.

And inside, there’s more bigness.

The opening “track” is “Composition #286 (Tentet),” which lasts 92 minutes and had to be split between the first two CDs. They could have stopped there — but no! Two more CDs hurl Braxton goodness at you, in increments of 18 to 33 minutes. Don’t bother looking for the hit single.

And if the hugeness of the tracks wasn’t enough, there’s the music itself — and that’s where the radio thing comes into play.  We put this album into rotation at KZSU for the usual nine-week run. MU-HAHAHAHAHA!!

See, the music is from Anthony Braxton’s Ghost Trance period, which is vaguely influenced by Native American musics: ritual chants and the like. It’s characterized by a steady, steady pulsing of sounds — but it’s not a steady heartbeat. Lots of triplets and…multiplets (7-over-4 rhythms, that kind of thing) pepper the piece to keep some disbalance going. And because note choices are often left to the performers, there’s a constant shifting of harmony — and yet, because the notes collide so often, it can feel like the same harmony, unrelenting.

For an unsuspecting radio listener, the macro effect is like a hammer, an ongoing pulse that’s varying juuuuust a bit from one strike to the next. BLIP! BIP! BLIP! BI-BAP! BAP! BIP! BLIP! BAP! BI-BAP-BIP! BLEP! BIP! BIP!

I went out of my way to insert segments of this music into my shows. Most times, it was like a sudden, massive roadblock. I loved it.

The part that really blows my mind is that they’re following sheet music! For 90 minutes! I’m imagining an impossibly long scroll of notes, notes, notes, notes. (The reality, I think, is that Braxton used visual cues to conduct the group, keep them on the same landmarks, and jump to different parts of the piece. The concentration required is still impressive.)

As with a lot of experimental music, a deep listen has its rewards here.  There’s usually some saxophone or other that’s soloing over the pulse, darting diagonally across the grid in an exciting free-jazz dance. Ghost Trace Music has a lot more color than in minimalist classical. It’s not like watching someone recite pi.

For more on Ghost Trance Music, check out this blog entry from Steve Smith, a music journalist for the New York Times and Time Out: New York. And take to heed his opening point: That this seemingly monochrome, pulsey music has a tie to the classic jazz bass walk. Hm.

Several Bay Area musicians worked with, or learned from, Braxton, and the Ghost Trance influence pops up now and again.  Dan Plonsey used a similar idea with his CD-long Daniel Popsicle compositions, which use a similar element of a rhythm that’s seemingly long-repeating but is varying just slightly from measure to measure. Two big difference are that Plonsey used a wider range of styles, and that he broke those pieces into segments that were clearly different — so there’d be a sudden shift into something pretty, or funky, or soft. There’s a evenhanded pleasantness to the Daniel Popsicle pieces, and they’re a good listen. But like the Braxton compositions, the sheer length and the near-repetitive nature could make for an endurance test of a concert.

That’s a long way from Sperry (although he probably played on a Daniel Popsicle piece or two).  The point: Be aware that Sperry got to play some challenging, serious music in some really fun settings.