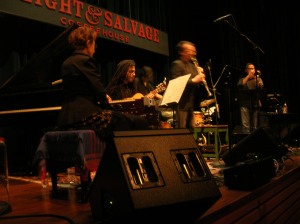 It’s fitting that, on a day when Steve Jobs announced a hotly anticipated new product, Be Bread was insanely great.

(Gawd, that’s awful. But how could I resist not making some allusion to the worst-named tech product in recent memory?)

Myra Melford is taking her band out for a spin, and it’s the exact sextet that appears on the CD The Whole Tree Gone, which came out last week. (As noted here.)  It’s the same band as on the CD, meaning three or four members had to be flown in from New York.

It’s a colorful band. The instruments got lots of attention and generated lots of discussion, especially Melford’s harmonium and the “other” clarinet that Ben Goldberg used on a couple of songs.

(A contrabass clarinet, maybe? Looks like a small tuba on a stick.)  Brandon Ross spent the entire show playing a miniature guitar — a mandolin with a guitarlike body, basically.

Of course, some songs take on a different tenor in a live setting. That’s how it should be!  “Night,” one of my faves from the album, struck me as being slower and more studious, lacking the same gradual buildup of intensity; instead, it shot forwards after a long buildup.  On the other hand, “Knocking from the Inside” came across as more spiky and jumpy, an amped-up version, with blast-off solos including Melford pulling out all the stops for a dizzying, scorched-earth piano assault.

The dramatic, unsual theme of “Moon Bird” was especially effective live, and Stomu Takeishi’s bass solo included some nifty fiddling around: a metal bowl as a slide, some clackety “unplugged” electric bass sounds, and nice use of feedback.

The two sets ended with “The Whole Tree Gone,” which offered the opportunity for one last set of solos and a stop-on-a-dime ending. They stuck the landing, as they say.

for solos, which I like, but that practice gets tricky when the music gets abstract.  Take Stomu Takeishi’s bass solo on “Moon Bird,” played with only Brandon Ross, also soloing on the mini-guitar, as accompaniment. It was clear when it ended — Takeishi went back to the central bass riff — but most people didn’t catch it, and it felt awkward to break the mood with applause moments later. The first half of “Equal Grace” featured lots of group improvising and a segment that you could consider a trumpet solo, but when that solo ended, the improvising continued — do you really want to applaud and break the spell?  It feels awkward.

The fiery, overt solos got the crowd going, though. Cuong Vu exploding near the end of “Moon Bird,” or that Melford attack on “The Whole Tree Gone,” got enthusastic responses.

This was my first trip to the new Freight & Salvage, by the way, which has been in its new location for five months. It’s sleek, clean, and roomy, and sports classrooms and offices inside the building. The coffee-serving area has been transplanted from the old space and looks exactly the same — so, still no espresso machine, but they’ve got fancy bottled root beer and ginger beer, and a variety of cookies and similar treats, some vegan.