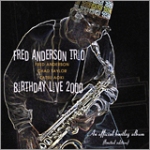 Part of the spoils from the Chicago trip.  This is a limited-edition disk that was being sold as a fundraiser for the Velvet Lounge, Anderson’s South Side joint, so it was a tad more expensive than usual.  That’s fine.

There’s not much to the packaging aside from the attractive black-background cover, a photo with enhanced borders for a line-drawing look. The music is the attraction: three fairly long (22-, 13-, and 14-minute) pieces.

The 22-minute opening track is table stakes, the kind of high-energy jazz you’d expect from Anderson’s bands: a straight-up sound with plenty of free attitudes in the soloing. Nice stuff that shows Anderson still has the creative fire burning.

Track 2 starts with a clever, poking bassline from Tatsu Aoki, a minimalist funk patter accompanied by a light tapping beat from Chad Taylor on drums.  It all hints at an exotic African rhythms, particularly once the saxophone starts into a slow, jamming mode and Aoki’s bass lays the foundation in very low, swampy notes and a catchy beat. It’s a wonderful piece, the best of the bunch.

tarts with Anderson unaccompanied, first in an upbeat blues mood but later wandering into other jazz territories, of course. He covers a lot of ground in five minutes before the rhythm section kicks in, Taylor with breezy fast drumming and Aoki opting for a bouncy, descending-note bassline. Anderson comes in with sax that’s plenty fast but not abrasive; coupled with the busy drums, it’s a piece with a lot of movement and a warm glow about it.

Great stuff.  But for a real birthday bash, check out the lineups for Anderson’s 2009 celebration, his 80th. You can see a list on Tatsu Aoki’s site, if you scroll down: Six days of artists like Ernest Dawkins, Ari Brown, Kidd Jordan, Henry Grimes, Dee Alexander and Jeff Chan. The Velvet Lounge is still selling promo posters from the event.