This is my first stab at not including the full playlist, just highlights. I don’t like the format yet and might continue tweaking it. Full playlist can be viewed here. 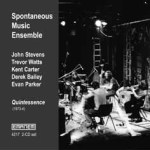 ….. It was a week to break out a large dose of “non- idiomatic” improv, as Derek Bailey liked to call it — abstract music several steps descended from jazz and soaked overnight in modern classical. We’ve got a small trove of recordings from the Spontaneous Music Ensemble, an early keystone of this music, and it’s been too long since I dipped in.

Big names adorn the 1974 “Quintessence” recordings (released on CD by Emanem): Bailey (guitar), Evan Parker (sax), Kent Carter (bass), and founders John Stevens (drums) and Trevor Watts (other sax). “Thirty-five minutes” is just short of 35 minutes long and shows how restraint was a crucial element to the band’s mission. It’s not like the burning free jazz of the time.

Dominic Duval, John Heward, Joe McPhee — “Undersound 11” — Undersound II (Leo, 2002)
….. Following that up, I played a 26-minute track from this trio, which recorded a couple of albums on Leo. It’s got a faster pace and more directly jazz-derived sound than the SME track, for a nice contrast. McPhee gets into plenty of extended sax twisting on this one — lots of multiphonics, for instance. And yes, the track is “Undersound Eleven” on the album “Undersound Two.”

…..Palermo has now put out three big-band albums devoted to Frank Zappa’s music; hence the title, Eddie Loves Frank. Joyous and rocking stuff. They even do a cover of “Night School,” which admittedly doesn’t sound like that hard (relatively) a track, but it’s always interesting to hear “live” readings of the no-humans tracks on Jazz From Hell. I’m feeling inspired to go listen to (and make another attempt at understanding) “While You Were Art II.”

Thomas Chapin — “Radius” — Radius (Mu, 1990)
….. Grabbed this for some downtown NYC cred. Turns out it was a lot more “inside” (a lot more) than I’d anticipated. No matter; still good stuff.