….. Led Bib is a two-sax band out of the UK doing free jazz with a many-piercings rock attitude. Like The Bad Plus, it’s brash and fun and can captivate audiences who otherwise don’t care about free jazz. So, yeah, a gateway drug.

….. Loose Wig is a Berkeley jazz band led by bassist Sam Bevan. Straighter stuff than I normally play, but it’s nice to give local folks a spin.

….. The Absolute Tradition of No Tradition snuck by me in the annals of Moe! Staiano. I think it’s his third solo album, released in 2007, and it’s got a great combination of Moe!’s pinpoint manic percussion (as on “Three Legs”) alternating with some noise tracks. Other tracks: “Ode to Ubu-o” combines both sides, pitting percussion against blurry guitar(?) blasts. “Short Continuum of the Falling Atmosphere in the Shape of Small Objects” is pretty much what the title says — stuff being dropped. 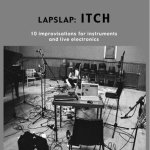 ….. The trio of Lapslap combines piano, french horn, and saxophone, but the two horn players also use computers to bend, ripple, and distort the sound (or just inject new noises). It’s well done stuff. I find I favor the tracks where the computers get used more subtly — then, combined with the nonstandard horn noises and tricks like playing inside the piano, a whole palette of sounds spreads out.

….. Cecil Taylor got played on a whim; the kind of show I do calls for a nod to the old guys once in a while, right? That track triggered the idea to give Denis Charles some love. I’d discovered him shortly before his death, upon purchasing a trio disc of Thomas Borgmann, Wilber Morris, and Charles called Organic, on the Lotus Sound label out of Albuquerque. It’s a captivating ecstatic-jazz set that I’d discovered at the now defunct Noise Noise

Noise, an outstanding record store in Orange County. I was still a relative newbie to free jazz (still am, actually) and just loved losing myself in the interaction in the music (they also recorded for CIMP, as I recall). As for the Denis Charles IVtet, it’s got Jemeel Moondoc on sax, Nathan Breedlove on trumpet, and Wilbert De Joode on bass. Some nice free jazz in the context of lightly grooving compositions like “Mota” here.

Interesting how I ended up picking all gray CDs to picture here.  Totally unintentional.

icon means there’s a review or description there as well. Little links that say things like “more here” go to previous entries in this blog.