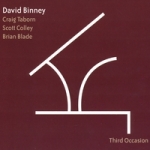 ….. David Binney does impressive work, but the ambitiously soaring intensity on Third Occasion gets to be a bit much for me. You can’t call it ECM stuff; Binney’s sax solos have a good rawness in them that maybe draws back to bebop (or maybe that’s just how it sounds to me on this particular listen). Nice, in any event.

….. That Ellery Eskelin/Andrea Parkins/Jim Black album is quite good. I want to write something more detailed later.

….. The Splatter Trio were a seminal part of the early ’90s golden age of Bay Area free jazz, improv, and generally out-there music. I ought to play their stuff more. 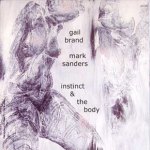 ….. “Regardless” is Gail Brand‘s new record label, and its inaugural release is a duet of Brand on trombone and Mark Sanders on drums, spinning organic, abstract improvsations. It’s a nice performance and comes in an elegant little package, too. Don’t know how widely available it is; I purchased a copy from Brand directly at the recent Matthew Sperry festival, noted here.

….. Fly is the impressive trio of Jeff Ballard (drums), Larry Grenadier (bass), and Mark Turner (sax). All three can be found in adventurous and relatively mainstream contexts; Ballard and Grenadier play in Brad Mehldau‘s trio, for instance. As a trio, they loosen up the music for an open-aired feeling heavy on group improv but still ear-pleasing enough for a Mehldau kind of crowd. They’re not out of place on ECM, but they’ve got a warm, earthly sound that’s a little uncharacteristic for the label. At first glance, it doesn’t appear ECM tweaked the group’s sound. I just wish I’d found out in time to catch their show at Yoshi’s.

….. Grooving, jazzy, and yet silly — that’s Roswell Rudd‘s home turf. The phrase “Suh Blah Blah Buh Sibi” gets sung throughout this nine-minute track, by Sheila Jordon as well as by Rudd, and Rudd turns in a bopping solo in the middle of it all.

….. Pure Horsehair is the duo of Garrett Devoe and Shahzad Ismaily doing folky guitar-based songs. Ismaily, separately, plays drums and sundry in 2 Foot Yard, a different kind of band that’s worth checking out.

….. The Kevin Tkacz Trio comes across like a regular piano trio, with that cooled-down late-night sound, but their album includes a few improvisations that open up some interesting abstract spaces. I’ll have to give this one a better listen.

….. Hiromi is more than technically proficient, with CDs featuring explosive piano and an explosive hairstyle. Beyond the inital bombast, though, she settles into straight jazz piano — expertly done, for sure, but not as radical as some people might think. That’s fine. She’s had a good career so far, it seems, and her style makes a good pairing with Chick Corea on their Duet album.

….. I haven’t said enough about the compelling Ultimate Frog album by Jim McAuley, a guitarist who’s buddies with Nels Cline and draws some cues from Jim Fahey. The 2-CD set pairs McAuley with a variety of musicians, producing a varied set of songs that struck me as having an overcast tone, a weaving of sadness throughout. When I found out the album was done in memory of McAuley’s deceased wife, the pieces clicked. Great stuff from someone who hasn’t recorded often.

….. The late Leroy Jenkins, on violin, is one of the five duet partners on The Ultimate Frog, and he also happens to be part of the Revolutionary Ensemble, a trio that played its last gig in 2005. That show was released on CD by the Mutable label recently. We’ve had both CDs for a while; I finally managed to put them together for a mini-tribute to honor Jenkins, as I’d said I might do so long ago. END_OF_DOCUMENT_TOKEN_TO_BE_REPLACED