I’d be remiss if I didn’t mention that I actually went to Marco Eneidi‘s solo concert the other night. It was great to hear him again. Eneidi gets a lot of comparisons to Jimmy Lyons’ quicksilver attack, and there was a lot of that in the program, but most of his improvisations worked calmer territory, letting single notes or sounds drift.

The Luggage Store Gallery has acoustics that I’ve heard described as “bright” — sounds are loud and dry, and you don’t get to savor a lengthy decay like you would in a concert hall. That’s fine; this is a downtown SF art gallery that’s miraculously survived for years putting on shows like this. When I say Eneidi would let notes “drift,” they would die quickly in the Luggage Store acoustics, and he played that effect well.

I’ve seen him perform there conducting large improvising orchestras or leading small groups. This time, it was just Marco, and it was nice. Plenty of other musicians from the scene were on hand to make him feel at home again.

Speaking of “home,” check out the flier that’s still on the wall of the Luggage Store’s office area/storage space/restroom queue: 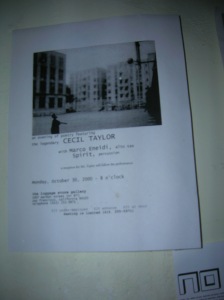 Eneidi’s set was followed by Rick Walker, a looping/electronics artist from Santa Cruz. He had the usual setup of pedals and effects, plus a few props as interesting sound sources. His music was decent stuff, and he got into a better rhythm during his set, after warming up a bit.

The final long piece was quite nice, opening with tuning forks resonated against his work table. Those sounds got blipped and mutated to become shimmering underwater chimes, and that made a rich, surreal background for improvisations on other instruments including a plastic purple pocket trumpet.